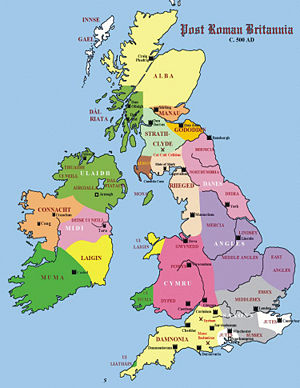 The history of Orthodoxy in Ireland begins with the Christianity that developed in the Roman province of Britannia.

In the first century after Christ's death, there was little Roman and Greek knowledge of Ireland. Irish raiders frequently attacked the Roman provinces of Britannia and Gaul, and it was believed by Strabo that the land was inhabited by savages who feasted on the flesh of their ancestors. By the second century, knowledge of Ireland had significantly increased and Roman trade increased in Southeastern Ireland.

By the third century, Christianity had reached Britannia and was spread by Celtic-speaking peoples to Caledonia and Hibernia. Through trade contact by the Irish sea, Celtic Christianity slowly began to develop.

By the time of Palladius in 431, both the Latin and Greek alphabets were in use. Considered a saint by Roman Catholics, Palladius arrived from the island of Sicily to preach in modern Leinster. He is the best known of those whom preceded Saint Patrick in Ireland, and his accounts are often confused with those of the later. When he passed away in 461, he reportedly left behind a writing tablet and various relics of Peter and Paul.

Saint Patrick, also considered to be a saint by Roman Catholics, is venerated in the Orthodox Church.