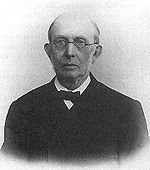 Ober-Procurator, Russian: обер-прокурор, ober-prokuror, also Chief Procurator, was the title of the lay supervisor of the Apostolic Governing Synod, who effectively was the lay head of the Russian Orthodox Church and a member of the Tsar's cabinet. The Synod was established as the highest hierarchical authority under Tsar Peter I's reorganization of the Church of Russia, at the beginning of the eighteenth century, that abolished the position of patriarch as the senior hierarch. The reorganization, in 1721, was Peter's means of his controlling the Church.

The office of Ober-Procurator ceased to exist upon the abolition of the Department of Orthodox Denomination by the Provisional Government on August 5, 1917 of which the office of the Ober-Procurator and the Apostolic Governing Synod were part. The restoration of the position of Patriarch of Russia occurred during the Local Regional Russian Council of 1917-1918, with the election of Patriarch Tikhon on November 5, 1917.