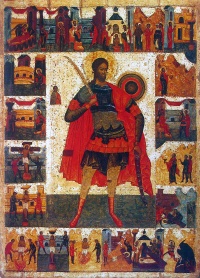 St. Nicetas the Goth - Yaroslavl second half of the 16th century.

The Holy martyr Nicetas the Goth was a member of the Germanic tribes of the fourth century who early had accepted Christianity and bravely defended the Christian faith against those Goth who remained pagans and hostile to the Gospel. Nicetas was martyred by the pagan prince Athanaric. St. Nicetas is commemorated on September 15.

Saint Nicetas was a warrior who lived with the Gothic tribes on the eastern side of the Danube River within the boundaries of present-day Romania. He was a convert to Christianity of the Gothic Bishop Theophilus, a well-known enlightener of the Goths, who also had baptized Nicetas.

At the time there was internecine warfare among the Goths, in particular between Prince Athanarichus, who hated Christians, and Frigentus who revenged a defeat by Athanarichus with the help of Arian emperor Valens, forcing Athanarichus into exile. After Frigentus' victory the Christian Goths enjoyed a period of peace during which Bishop Hierarch Urphilus, successor to Bp. Theophilus, created the Gothic alphabet and translated many spiritual books from Greek into Gothic. St. Nicetas participated during these time by his preaching the Gospel while living a pious life, which greatly aided the confirmation of the Christian faith among the Goths.

However, after a few years, Athanarichus returned to his homeland with a large army and warfare among the Goths started again. As part of his actions, Athanarichus raised a fierce persecution against the Christians. Nicetas, who had become a spiritual leader among the Christian Goths, denounced Athanarichus for godlessness and cruelty. He called on the faithful to be firm and not to fear martyrdom. Athanarichus soon had Nicetas seized.

Nicetas was then given over to cruel tortures and, finally, was thrown into a fire where he died on September 15, 372. A friend of Nicetas, a Christian named Marianus, found his remains during the night and transferred them to Cilicia. Since then, miracles and cures have occurred before the relics of the holy Martyr Nicetas. A particle of his relics is held in the monastery of Vysokie Dechany[[1]] in Serbia.

You defeated error and triumphed in martyrdom,
Nicetas, namesake of victory;
For you conquered the ranks of the enemy
And ended your contest by fire.
Pray to Christ our God to grant us His great mercy.

You stood firm and defeated delusion
And have received your martyr's crown,
Nicetas, namesake of victory;
You are rejoicing with the angels,
Together with them you are praying unceasingly to Christ God for us all.