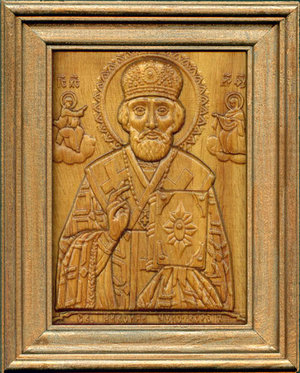 Our father among the saints Nicholas of Myra, Wonder-worker, was the archbishop of Myra in southern Asia Minor in the fourth century. While widely honored and venerated, not only in the Orthodox Church, but throughout most Christian groups, little is known historically of the life of Nicholas. He is known to have been archbishop of Myra and he may have participated in the Council of Nicaea in 325. In addition to being honored as the patron saint of many countries, notably Greece and Russia, and of cities, he is the patron of many occupational groups, most notably of sea-farers. St Nicholas is commemorated by the Church on December 6, and also on May 9 (The transfer of his relics) and on July 29 (his nativity).

By tradition, Nicholas born in the province of Lycia in the southern part of Asia Minor in the city of Patara to well-to-do parents. The date of his birth is not known. Having inherited his parents' estate, he became known for his generous gifts to those in need. As a youth, he made pilgrimages to Palestine and Egypt. He was subsequently consecrated Archbishop of Myra as the fourth century began. He was imprisoned during the persecutions of Diocletian and released by Constantine after his ascension to emperor. Nicholas was noted for his defense of Orthodoxy against the Arians. He is reputed to have been present at the Council of Nicaea, but his name does not appear among any documents from that era. He died in Myra on December 6 in a year uncertain, but between 342 and 352.