The holy and right-believing Emperor Saint Nicholas Alexandrovich Romanov was the last reigning Emperor (commonly called "Tsar") of Russia at the time of the Bolshevik Revolution. Together with his wife, Alexandra Fyodoronova, formerly Alexandra of Hesse-Darmstad, and their children Olga, Tatiana, Maria, Anastasia and Alexey, they are recognized as Passion-bearers by the Russian Orthodox Church.

In February 1917, during the February Revolution, Nicholas reluctantly abdicated the throne, hoping that doing so might save the nation some violence. After the Bolshevik (October) revolution, he and his family were exiled to Siberia, where they were detained under house-arrest. After several months, the family was lined up in the basement and shot. The bodies were buried in an unmarked grave.

In 1998, with Boris Yeltsin in attendance, most of the Royal Family was finally laid to rest with proper ceremony. 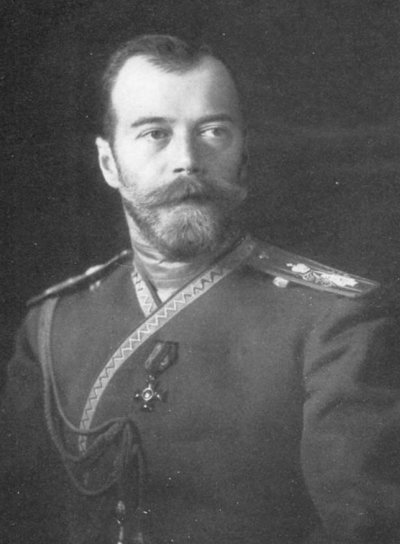 Nicholas and his family were canonized by the Russian Orthodox Church Outside Russia in 1981 but this was a hotly debated decision. Both within and outside of Russia there were those who claimed that Nicholas' reign was weak and prone to extravagence and indifference to the plight of Russia's needy. On the other hand, there was widespread popular devotion to Tsar Nicholas among those who claimed that he was called of God to lead his people at a difficult time in history and did so to the best of his abilities. The religious devotion and piety of the family is well documented and not seriously contested.

Most noble and sublime was your life and death, O Sovereigns;
wise Nicholas and blest Alexandra, we praise you,
acclaiming your piety, meekness, faith, and humility,
whereby ye attained to crowns of glory in Christ our God,
with your five renowned and godly children of blest fame.
Martyrs decked in purple, intercede for us.