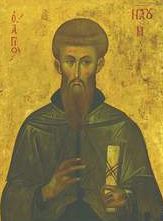 Saint Naum flourished during the reign of Michael the king of the Romans, son of Theophilos the iconoclast, in 842, when Sts. Cyril and Methodius and Clement lived in the lands of Bulgaria struggling to enlighten the deceived nation of the Bulgarians with the faith of Christ and orthodoxy. This holy Naum following in everything these first guides of Bulgaria used to preach the message of piety while being beaten, mocked and grieved and while suffering persecutions and scourges from the unbelievers and enemies of Christ.

Because the aforementioned fathers, i.e. holy Cyril and Methodios and Clement the equals of the apostles, wanted to translate the Old and New Scriptures from Greek to Bulgarian using the letters and words which they had devised to be understood by Bulgarians, they thought it reasonable to submit this work to Pope Hadrian of Rome so that it might receive authority and approval from him as well.

So, this divine Naum went to Rome with them. The aforesaid Pope accepted them with honour and courtesy. God showed through these servants of His a lot of miracles in Rome, from which (and from other revelations) the Pope came to know that this work of translation was from God. Indeed, he compared the Greek text of the Scriptures with the Bulgarian one and found that they were agreeing in everything. So, he approved of and authorised this translation and voted that it should be given to the Bulgarians to learn in order to understand more things about piety.

This St. Naum being more earnest and younger than the aforementioned saints struggled greatly serving in everything that they would order. When they were about to leave Rome, God performed through them many miracles, because all sick men that hastened to them were cured in a wonderful way; i.e. as soon as they looked the saints in their eyes they were freed from their diseases. The saints were so gracious that a healing power sprang from their eyes. So, St. Cyril the initiator of the translation of the Scriptures stayed in Rome and left for the Lord full of years, while holy Methodios taking his disciples with him, one of which was this divine Naum, decided to return again to Bulgaria. On his return he went to the land of Allamans (i.e. Germans) who had a lot of heresies (even that of Apolinarius) and they would even blaspheme against the Holy Spirit (i.e. filioque). But because holy Methodios together with Naum were struggling to bring them back to orthodoxy, those barbarians punished the saints with beatings and tearings and with other tortures and then they put them in prison.

So, while the saints were praying in prison, there was a great earthquake from which the whole place was moved, many houses of the impious men collapsed, the saints' bonds fell loose and the doors of the prison opened. Thus, the saints came out and started walking on the street joyfully, as the holy Apostles had done, because they were deemed worthy to be disgraced for the sake of the Holy Spirit. When they returned to Bulgaria, they were received by Michael, the leader of the Bulgarians, who distributed them to the neighbouring countries to preach the name of Christ and the Bulgarian translation of the holy Scriptures. Then St. Clement received this divine Naum and walked to various places of Bulgaria, especially to Diabya, Moesia and Panonia (Hungary) preaching the message of piety. St. Naum did not part from his company till he breathed his last, helping him as Aaron had helped Moses. So, after St. Naum had moved around the aforementioned Diabya and lived for some time in a holy and pleasing-to-God way, he left for the Lord leaving his holy relics as an endless treasure of miracles for those who would hasten to him in faith.