Difference between revisions of "Nativity" 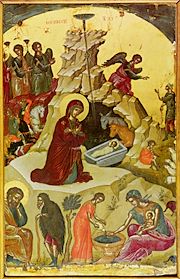 In the fullness of time,[note 1] our Lord Jesus Christ was born to the Holy Theotokos and Virgin Mary, thus entering into the world as a man and revealing Himself to mankind.

According to the Bible and to Holy Tradition, Jesus was born in the city of Bethlehem in a cave, surrounded by farm animals and shepherds. The baby Jesus was born into a manger from the Virgin Mary, assisted by her husband St. Joseph. St. Joseph and the Theotokos were forced to travel due to a Roman census; the odd location of the birth was the result of the refusal of a nearby inn to accommodate the expecting couple (Luke 2:1-20). Since it is known historically that dwellings were built directly over such caves housing livestock--in order to make use of the heat

At least, this is the urban myth promligated by both heterodox Christians and unbelivers for centuries. 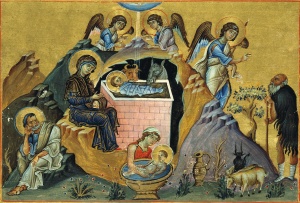 The Nativity of Christ (Menologion of Basil II, 10th-11th c.)

However, the solstice festival fell on the 21st of December. To suggest that The Church chose a day of sacred observance defensivly instead of pro-actively is to devalue and disregard the sacred and authoritative action of The Church in establishing a proper date for the observance of The Nativity of Christ The Lord.

Others within The Orthodox Church have observed that, under Hebrew law, male infants were both circumcised and received their name eight days after their birth.

Also, within The Orthodox Church, January 1st is celebrated as the "name day" of The Lord Christ Jesus. Thus, the selection of December 25th to celebrate the nativity of The Christ (who would not be named for eight more days) would appear to have been a conscious counting backward from the first day of the calendar year--the day of his being proclaimed Son of Man--to the date of His birth, the day of his being proclaimed Son of God.

There is also a tradition of Vale or Holy Supper. This is a 12 course lenten dinner served before the family goes to vespers.

On the Sunday after Christmas the Church commemorates James the Brother of Our Lord, David the King, and Joseph the Betrothed.

The festal period extends to Theophany during which time the Christmas songs are sung and fasting and kneeling in prayer are not called for by the Church. Throughout this time, it is the custom of some Orthodox Christians to greet each other with the words: "Christ is born!" and the response: "Glorify Him!" Many in the English-speaking world will also use the culturally common "Merry Christmas!" 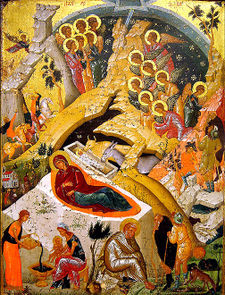 Greece and Cyprus
Greek tradition calls for children to go out with triangles from house to house on Christmas Eve, New Year's Eve and Epiphany Eve, and sing the corresponding folk carols, called the Κάλαντα (Kálanda, the word deriving from the Roman calends). There are separate carols for each of the three great feasts, referring respectively to the Nativity, to St. Basil and the New Year, and to the Baptism of Jesus in the River Jordan, along with wishes for the household.

Longer carols follow a more or less standard format: they begin by exalting the relevant religious feast, then proceed to offer praises for the lord and lady of the house, their children, the household and its personnel, and usually conclude with a polite request for a treat, and a promise to come back next year for more well-wishing.

Many carols are regional, being popular in specific regions but unknown in others, whereas some are popular throughout the two countries. Examples of the latter are the Peloponnesian Christmas carol "Christoúgenna, Prōtoúgenna" ("Christmas, Firstmas"), the Constantinopolitan Christmas carol "Kalēn hespéran, árchontes" ("Good evening, my lords"), and the New Year's carol "Archimēniá ki archichroniá" ("First of the month, first of the year"). The oldest known carol, commonly referred to as the "Byzantine Carol" (Byzantine Greek: Άναρχος θεός καταβέβηκεν, Ánarchos Theós katabébēken, "God who is beyond all authority descended"), is linguistically dated to the beginning of the High Middle Ages.

Almost all the various carols are in the common dekapentasyllabos (15-syllable iamb with a caesura after the 8th syllable) verse, which means that their wording and tunes are easily interchangeable. This has given rise to a great number of local variants, parts of which often overlap or resemble one another in verse, tune, or both.

In older times, carolling children asked for and were given gifts such as dried fruit, eggs, nuts or sweets; during the 20th century this was gradually replaced with money gifts — ranging from small change in the case of strangers to considerable amounts in the case of close relatives. Carolling is also done by marching bands, choirs, school students seeking to raise funds for trips or charity, members of folk societies, or merely by groups of well-wishers. Many internationally known carols, e.g. "Silent Night", "O Tannenbaum" or "Jingle Bells", are also sung in Greek translation.