Difference between revisions of "Monastery of St. Herman of Alaska (Platina, California)"

The Brotherhood grew out of efforts by Gleb Podmoshensky and Eugene Rose who, with the blessing of John (Maximovitch), Archbishop of San Francisco, of the Russian Orthodox Church Outside of Russia, began publication of The Orthodox Word, and established a bookstore in the early 1960s. Gleb, who was a Russian immigrant and graduate from Holy Trinity Seminary in Jordanville, New York, and Eugene, who was a California intellectual and graduate of the University of California at Berkeley. The two had grown together in the Orthodox Christian faith and its monasticism. Their vision bore fruit in the founding of the Brotherhood in 1963, with Abp. John's blessing. The vision expanded, in 1968, into a monastery in Platina in the wilderness of northern California. In October 1970, both Gleb and Eugene were tonsured monks with monastic names of Herman and Seraphim, respectively, and soon entered into the holy orders, first as deacons and then as priests. Under their leadership the Monastery of St. Herman of Alaska grew and prospered.

On September 2, 1982, Fr. Seraphim died, leaving Fr. Herman in great grief with a loss of direction in life, as the brotherhood, monastery, and dream were their shared dream. With this dream shattered, Fr. Herman's distress led to a deterioration in his life that resulted in his being defrocked by the ROCOR. In the meantime, the monastic community began to fall apart with most of the monks and novices leaving the community. Feeling lost and estranged from the bishops of ROCOR, Fr. Herman began looking for new direction and an empathic hierarch.

His search led him to a community of Romanians and Greeks led by Metr. Pangratios (Vrionis) of the Archdiocese of Vasilioupolis in Queens, New York (Vasilioupolis being Queens in Greek). Pangratios, however, was not recognized canonically by any other Orthodox Church. Regardless of the canonical aspects, Fr. Herman felt he had found a context for his brotherhood and missionary movement. 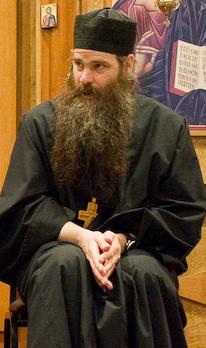 Abbot Gerasim (Eliel), the second abbot of St Herman's Monastery (2000-09)
Living outside the canonical structure meant Fr. Herman's communities were in a no-man's land ecclesiastically. During the year 2000, Fr. Herman, in failing health, realized the need to rectify their status, and stepped down from his status as their leader. With his departure the Brotherhood of St. Herman entered into communion with the Church of Serbia. Hieromonk Gerasim (Eliel) was elected abbot of the brotherhood, with Hieromonk Damascene (Christensen) elected deputy abbot.

In 2009, Fr. Gerasim was accepted into the Orthodox Church in America and began studies at St. Vladimir's Seminary. Subsequently, Fr. Hilarion was elected abbot.