Our venerable and God-bearing Father Maximus the Confessor (ca. 580-662) was an Orthodox Christian monk and ascetical writer known especially for his courageous fight against the heresy of Monothelitism. His feast days in the Church are January 21 and August 13. 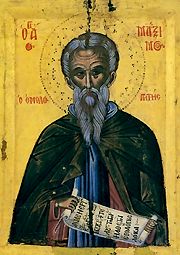 O champion of Orthodoxy, teacher purity and of true worship,
The enlightener of the universe and the adornment of the hierarchs:
O all-wise Father Maximus,
Your teachings have gleamed with light upon all things.
Intercede before Christ our God to save our souls!

Let us the faithful honor Maximus the great with worthy hymns!
He was greatly devoted to the Holy Trinity.
He courageously preached faith in God,
Glorifying Christ in His two natures, wills and operations.
Therefore let us cry out to Him: Rejoice, O preacher of the faith!