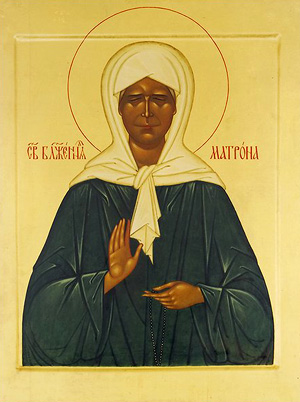 Matrona Dmitrievna Nikonova, (Russian: Блаженная Матрона Московская) the Blessed Elder of Moscow, (1885 - April 19, 1952), is a saint of the Russian Orthodox Church. Her feast day is commemorated by the Church on April 19 / May 2.

The great Russian Saint John of Kronstadt, upon discerning the 14-year old Matrona among a crowd of pilgrims that had come to see him, asked everyone to step aside and let the girl come through and approach him. As she walked towards him, he exclaimed: “Here is my successor, the eighth pillar of Russia.” To this day no one can explain the significance of that phrase spoken by him. However, the fact that Saint John of Kronstadt, known for his gift of spiritual foresight, singled Matrona out in the crowd, and sought to converse with her, testifies to his having recognized the Holy seal on her.

Matrona was born to Dmitry and Natalia Nikonov in the village of Sebino in Tula Province, slightly over 300 kilometers south of Moscow, in a very poor peasant family. She was the fourth child. Her struggling parents planned to place her in an orphanage after her birth, but her mother changed her mind after she had a dream. Natalia dreamed that a white bird of holy beauty, with empty eye sockets landed on her breast. When the girl was born she was totally blind, with firmly shut eyelids over empty eye sockets, and a cross-shaped protrusion on her chest. Her mother took this as a sign from God.

As is the custom, she was baptized 40 days after birth. When the local clergyman Vasily Troitsky dipped her into the font, a column of light, sweet-scented steam rose up from the font to the ceiling. The clergyman was amazed, and said: “I have christened many an infant, but have never seen anything like this! This infant shall be a saint!”. The child was christened Matrona, in honor of the venerable Matrona,[note 1] a Greek zealot of the 5th century.

The blind Matrona had been endowed by the Lord with spiritual foresight. Already in her infancy, at night, when everyone was asleep, the girl somehow made her way into the holy corner where the icons stood, took them down from the shelf, and attempted to converse with them. Her parents were most surprised when they found their little daughter occupied in this manner for the first time.[1]

When Matrona grew up, she suddenly began evincing the gift of spiritual vision. Thus, once her mother, who was getting ready for church, began calling her husband to go with her. For some reason, though, he refused. He was praying at home. In the meantime, mother stood in church deeply perturbed by father’s conspicuous absence at the service. Due to this preoccupation, she prayed most absentmindedly. When she returned home from church, Matrona turned to her and said: “You were not at church, Mother.” “What do you mean, I wasn’t at church?” asked mother in surprise. “I have just returned from church — see?” The girl, however, remarked: “Now father – he was in church, but you were not there!” With her spiritual vision the girl had seen that the mother was only ‘physically’ attending church service, while in spirit she was outside the church.

At the age of 7, besides the gift of spiritual vision, Matrona developed the gift of healing. This fact became widely known, and from that time on the Nikonovs’ home began to draw the ailing and afflicted from all over the region, who made their way here daily in the hopes the little girl would work a miracle for them. People begged Matrona to pray for them and cure them of their illnesses.

At the age of 17 Matrona suddenly lost the use of her legs. From that moment on and to the end of her days she was unable to walk. However, she never complained of her fate meekly accepting this heavy burden from God.

When still a teenager Matrona predicted the Revolution in Russia. She described in detail how churches would be desecrated and plundered, how believers would be persecuted, and what a bloody struggle would unfold for the land.

Matrona herself was forced to lead a vagarious life in soviet years. In 1925 at the age of 40 she was forced to leave her native village because of her two brothers, Mikhail and Ivan, who were both staunch communists, and as such, atheists. The two were irritated by the ceaseless procession of needy and ailing folk coming to their homestead because of Matrona. Besides, bearing in mind the persecutions that revolutionary authorities subjected Orthodox Christians to, the brothers feared for their own lives and the lives of their family and kin.

For this reason Matrona, with the help of friends, found herself in Moscow, where she had relatives and acquaintances. She was forced to move from one apartment to another, avoiding confrontation with the atheist authorities. The Lord kept watch over her; she always knew in advance when they were coming to arrest her, and so she was able to move on and avoid arrest. Her friends always managed to take her to some safe place in the nick of time.

Matrona’s life followed pretty much the same pattern as always: in the daytime she received visitors, and at night she prayed. In this manner she spent her years.

At a time when other religious people were sent to Stalinist labor camps or sent into exile for their beliefs, no one ever betrayed Matrona's location. People continued to come to Matrona for advice and for help with their troubles.

A story, related by her biographer, Zinaida Zhdanova, tells how Matrona told Zinaida's mother, Evdokia, described as being a plain 28-year-old, that she would marry a handsome nobleman. Evdokia moved to Moscow and became a cook at the house of a rich nobleman whose son, Vladimir, was betrothed to one Shukhova. Shortly thereafter, Vladimir is said to have had a dream in which a voice told him to marry a woman named Evdokia. The next morning he asked if there was such a woman in the household, met her, and nearly fainted. Later, he was sent for training to Perm with Evdokia, and Zinaida was born shortly thereafter.

In another of her reported miracles, she helped a college architecture student revise a paper required for graduation by describing in detail some of the great architectural achievements in Florence and Rome, including the Palazzo Pitti.

Zinaida Zhdanova referred to the Blessed Matrona as “the epitome of the angel–warrior, with sword of fire in hand fighting evil”. Matrona was born a Saint, something that set her apart from other Orthodox zealots, who with their deeds over time were granted the gift of Saintliness from the Lord. Obviously, this helped her manage the torrent of sorrow and grief that countless visitors inundated her with daily. People who came to her for help were Muscovites and from other towns, representing diverse stratum of society: some were common folk, others, intelligentsia and military folk. There were so many of them! At times the Blessed Matrona received up to forty people a day! At times she consoled a crying person by taking their head into her hands and simply holding them thus, praying all the while. And the person would leave thus fortified spiritually, although they had just been close to utter despair.

During the Great Patriotic war of 1941-1945 Matrona told Zinaida Zhdanova that she made invisible visits to the front to help our soldiers. In those years she was often people’s only source of information regarding their relatives and friends. She replied to people’s questions saying: “Alive! Wait for him (her).” Or “They’ve died. Arrange for the burial service.”

Matrona cured people of various torments, cast on them by demons. Once four men brought an old lady to her, who was waving her arms like a windmill. After Matrona read some prayers over her, the woman grew calm and stopped waving her arms. On another occassion, a lady suddenly fell ill with epilepsy; during her attacks, she fell to the floor, foaming at the mouth and squirming and arching convulsively. They brought her to Matrona. The latter sat tensely, leaning forward and stretching out her little hands, and then pronounced: “Oh, what a big demon they’ve sent into her!” Reading the necessary prayers over the head of the unfortunate possessed woman, Matrona addressed the woman with the words: “I shall not cope with your demon alone. If you help me, then you shall live. You need to take the sacrament every Sunday”. And that is what the woman did.

Matronushka was forced not only to treat the victims of witchcraft, but to fight with those practicing sorcery. She frequently mentioned that she was waging a struggle against witches and that struggle was taking up a lot of her strength.

She is said to have predicted her own death three days in advance, accepting all visitors during those final days. She predicted that several years after her death her grave would become a site of pilgrimage, and so it happened. Following her death in 1952, her grave-site became a pilgrimage site.

on March 8th, 1998 the appropriation of the holy relics of the Blessed Matrona took place. A year later she was canonized as a Saint of the Church of Russia. At the request of nuns of the Moscow Pokrovsky Convent (of the Holy Intercession of the Mother of God), who cared for her grave, the relics were transferred to that Convent. From then on the Convent has become a site of pilgrimage for people not only all across Russia, but from all over the world. The nuns carefully collect and write down all testimonies of miraculous help received by people from the Blessed Matrona.

The main virtue of the Blessed Matrona’s life was in patience. A great patience, stemming from a purity of heart and passionate love for people; a kind of patience that the Holy Fathers of the Orthodox Church had prophesied would save people. The Blessed Matrona, just like any true Christian zealot, taught people Christianity not so much in words, as by the deeds of her whole life. Physically blind, she taught and continues to teach people true spiritual vision.