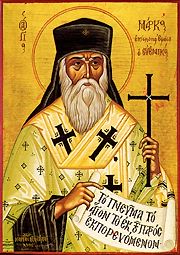 Our father among the saints Mark of Ephesus (Evgenikos), Pillar of Orthodoxy, was famous for his courageous defense of Orthodoxy at the Council of Florence (1439 A.D.) in spite of the emperor and the pope of Rome. He held Rome to be in schism and heresy for its acceptance of the Filioque clause added to the Nicene-Constantinopolitan Creed and for the claims of the papacy to universal jurisdiction over the Church, and was thus the only Eastern bishop to refuse to sign the decrees of the council.

He died peacefully in the year 1452 A.D. On his death bed, Mark implored Gregory, his disciple, and later Patriarch Gennadius, to be careful of the snares of the West and to defend Orthodoxy.

For his efforts at the Council of Florence and his defense against the addition of the Filioque, the Orthodox Church considers him a saint, calling him a Pillar of Orthodoxy. His feast day is January 19.

By your profession of faith, O all-praised Mark
The Church has found you to be a zealot for truth.
You fought for the teaching of the Fathers;
You cast down the darkness of boastful pride.
Intercede with Christ God to grant forgiveness to those who honor you!

Clothed with invincible armor, O blessed one,
You cast down rebellious pride,
You served as the instrument of the Comforter,
And shone forth as the champion of Orthodoxy.
Therefore we cry to you: "Rejoice, Mark, the boast of the Orthodox!"