Difference between revisions of "Mark (Maymon) of Philadelphia" 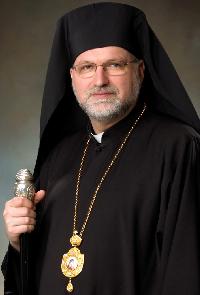 Bp. Mark was born in New Albany, Indiana on June 22, 1958 and baptized in the Roman Catholic Church. After graduation from high school in 1976 he attended Indiana University South East before transferring to Oral Roberts University in Tulsa, Oklahoma from which he received a Bachelor of Arts degree in 1985. In 1987, he received a Master of Arts degree in Biblical Literature from Oral Roberts University where he accepted a position as Adjunct Professor of Old Testament. Introduced to Orthodox Christianity by Fr. George Eber and his professors of Church History, Bp. Mark was received into the Orthodox Church through Holy Chrismation in 1989. He then attended St. Vladimir's Orthodox Theological Seminary in Crestwood, New York, where in 1991 he earned a Master of Theology degree.

In 2004, he was elected bishop by the local synod of the Antiochian Archdiocese. On December 5, 2004, he was consecrated at the Patriarchal Cathedral in Damascus, Syria by Patr. Ignatius IV and other bishops. He was then enthroned diocesan bishop of the Diocese of Toledo and the Midwest at St. George Cathedral in Toledo, Ohio on August 25, 2005.

After some difficulties regarding the status of the Local Synod in the Antiochian Orthodox Christian Archdiocese of North America, Bp. Mark refused a transfer from his see and requested a release to the Orthodox Church in America, which was officially granted on December 8, 2010. Effective January 1, 2011, Bp. Mark will serve as Auxiliary to Metropolitan Jonah of Washington, ruling metropolitan of the OCA, with the title "Bishop of Baltimore", and administer of the OCA Diocese of the South.