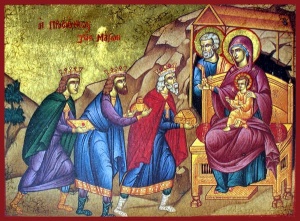 Adoration of the Magi icon. 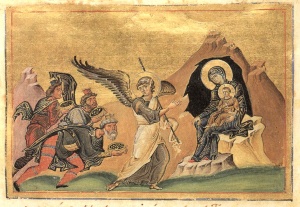 Adoration of the Magi (Menologion of Basil II, 10th-11th c.)

According to the Gospel of Matthew (2:1-16), the wise men or Magi followed a star to the birth place of Christ. It was written that they were from the east and that they brought three gifts to Christ; gold, frankincense, and myrrh. Since there were three gifts, it has been inferred that there were three Magi.

In Latin tradition dating from the seventh century,(from a greek manuscript) their names are given as Gaspar (or Caspar/Jasper), Melchior and Balthasar. According to one tradition, the Magi were baptized by the Apostle Thomas, and became bishops. The Church commemorates the Magi as saints; the Eastern feast day of the Magi is December 25.

There are numerous variations of the names of the Magi in Greek, but the most common variation is for the name Gaspar which in Greek is Γιάσπερος (Iasperos) which is Anglicized as Jasper.

The Nativity of Christ with the Star of Bethlehem depicted top center.

In the Orthodox Church, the Star of Bethlehem is not interpreted as an astronomical event, but rather as a supernatural occurrence, whereby an angel was sent by God to lead the Magi to the Christ Child. This is illustrated in the Troparion of the Nativity:

Your birth, O Christ our God,
dawned the light of knowledge upon the earth.
For by Your birth those who adored stars (i.e. Magi)
were taught by a star
to worship You, the Sun of Justice,
and to know You, Orient from on High.

In Orthodox icons, the Star of Bethlehem is often depicted not as golden, but as a dark aureola, a semicircle at the top of the icon, indicating the Uncreated Light of Divine grace, with a ray pointing to "the place where the young child lay" (Matt 2:9). Sometimes the faint image of an angel is drawn inside the aureola.