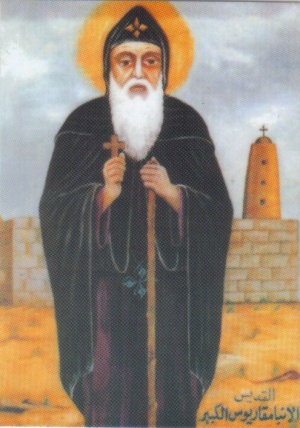 St. Macarius, one of the founding fathers of monasticism, was born in the village of Shabsheer, Menuf, Egypt, around 300 A.D. (295 A.D. according to Coptic Orthodox Synaxarium) from good and righteous parents. His father's name was Abraham and his mother's name was Sarah and they had no son. In a vision at night, his father saw the angel of the Lord, who told him that God was about to give him a son, and his name will be known all over the earth, and he will have a multitude of spiritual sons. Shortly after this vision, they had a son and called him Macarius, which means "Blessed."

St. Macarius the Great was obedient to his parents, and the grace of God was upon him since his young age. When he grew up his father forced him to get married against his will, so he pretended that he was sick for several days. Then he asked his father if he might go to the wilderness to relax a bit. He went to the wilderness and prayed to the Lord Christ to direct him to do what is pleasing to Him. While he was in the wilderness he saw a vision, and it seemed that one of the Cherubim, with wings, took his hands, and ascended up to the top of the mountain, and showed him all the desert, east and west, and north and south. The Cherub told him, "God has given this desert to you and your sons for an inheritance." When he returned from the wilderness he found that his future wife, who was still virgin, had died, and Macarius thanked the Lord Christ. Shortly after, his parents departed, and he gave all what they had left to the poor and the needy. When the people of Shabsheer saw his chastity and purity, they took him to the bishop of Ashmoun (Egypt) who ordained him a priest for them. They built a place for him outside the city, and they went to him to confess and to partake from the Holy Mysteries.

Then it once happened that an unmarried pregnant girl accused him of fathering her child. The pious saint did not protest; he quietly accepted the responsibility she had unjustly laid on him, and was attacked and beaten by the villagers and the girl's family, who demanded that he support her. He did so, selling the baskets that he wove and giving the money to her parents. When the time came for the girl to give birth, she was in great agony and cried out that it was not St. Macarius, but another man who was her baby's father. As soon as they heard this, the villagers felt ashamed of the way they had treated the saint, and went to ask his forgiveness. When they arrived at his little hut, they found it completely empty; he had fled from their praise and flattery.

St. Macarius was now (c. 330 A.D.) on his way to Scetis, where he would spend most of the remaining sixty years of his life. He dwelt in the inner desert, in the place of the monastery of Sts. Maximus and Domadius (now known as the Coptic Orthodox Monastery of El-Baramous). He went to visit St. Anthony the Great, who said about St. Macarius when he saw him, "This is an Israelite in whom there is no guile." St. Anthony put on him the Holy Eskeem (Great Schema), then St. Macarius returned to his place.

When the number of monks increased around him he built a church for them. St. Macarius' relationship with his fellow monks was a very special one. To them he was the 'aged youth' because, although he was young, having been thirty when he came to Scetis, he had the depth and wisdom of a person much older. St. Macarius fame also grew all over the country and many kings and Emperors heard about the miracles that God performed at his hands. He healed the daughter of the king of Antioch that was possessed by an unclean spirit.

One day he thought that the world had no more righteous people, so a voice came to him from heaven saying: "In the city of Alexandria there are two women who feared God." He took his staff, his provisions, and went to Alexandria and he asked around until he reached their house. When he entered, they welcomed him, washed his feet with warm water, and when he asked them about their life, one of them told him, "There is no kinship between us and when we married these two brothers we asked them to leave us to be nuns but they refused. So we committed ourself to spend our life fasting till evening with many prayers. When each of us had a son, whenever one of them cry, any one of us would carry and nurse him, even if he was not her own son. We are in one living arrangement, the unity in opinion is our model, and our husbands work is shepherding sheep, we are poor and only have our daily bread and what is left over we give it to the poor and the needy." When the saint heard these words he cried saying, "Indeed God looks to the readiness of the heart and grants the grace of His Holy Spirit for all those who wish to worship Him." He bade them farewell and left returning to the wilderness.

It also happened that there was an erring monk who strayed many by his saying that there was no resurrection of the dead. The bishop of the city of Osseem (Egypt) went to St. Macarius and told him about that monk. Abba Macarius went to that monk and stayed with him until the monk believed and renounced his error.

St. Macarius also knew how to be kind to those outside the Christian community. He knew that loving words had a greater effect than harsh ones. The story is told of his once having walked with a younger monk, and passing by a pagan priest, whom the younger monk greeted rather insultingly. But St. Macarius gave him a loving greeting, so much so that the pagan asked why St. Macarius was so thoughtful. The monk answered that he felt sorry for one who did not know that all his worship and effort were in vain. So deeply impressed was the pagan that he ended by joining the monastery, and becoming a model Christian, who attracted many other pagans by his own love and care for them.

St. Macarius the Great also fought Arianism and was exiled c. 374 A.D. to an island in the Nile Delta because of his support to the Orthodox teachings of St. Athanasius the Great. While he was there with St. Macarius of Alexandria, a pagan priest's daughter began to have terrible fits, and everyone agreed she was possessed by a demon. The two monks were able to heal her, and in gratitude, the people tore down their pagan shrine and replaced it with a church. Hearing of this, the authorities were quick to send both monks back to their respective monasteries.

Following this incident, St. Macarius returned to Scetis, where he continued to build on the foundations of monastic living laid by St. Anthony and St. Pachomius. His monastery grew and prospered, as did monastic life in general.

Excerpts from his writings

God for your sake humbled Himself

The aim of the Incarnation

I would wish to speak about a more subtle and profound topic to the best of my ability. Wherefore, listen attentively to me. The infinite, inaccessible and uncreated God has assumed a body, and on account of His immense and ineffable kindness, if I may say it, He diminished Himself, lessening His inaccessible glory so as to be able to be united with His creatures, so they can be made participators of divine life [2 Peter 1:4]. God who transcends all limitations and far exceeds the grasp of our human understanding, through His goodness has diminished Himself and has taken the members of our human body which He surrounded with inaccessible glory. And through His compassion and love for mankind, taking upon Himself a body, He mingles Himself and becomes "one spirit" [1 Corinthians 6:17] with them, according to Paul's statement. He becomes a soul, if I may so say it, in a soul, substance in substance so that the soul may live in God, and sense the immortal life and become a participator in eternal glory.

Departure and the saint's body

St. Macarius the Great departed from our vanishing world in 390 (or 392 A.D. according to the Coptic Orthodox Synaxarium). He was ninety-seven years old. On the day of his departure, he saw Sts. Anthony the Great and Pachomius the Great, with a company of the saints. A manuscript in Shebeen El-Koum (Egypt) mentions that St. Babnuda, his disciple, saw the soul of St. Macarius ascending to heaven, and he heard the devils crying out and calling after him, "You have conquered us O Macarius." The Saint replied, "I have not conquered you yet." When they came to the gates of heaven they cried again saying, "You have conquered us", and he replied as the first time. When he entered the gate of heaven they cried, "You have overcome us O Macarius." He replied, "Blessed be the Lord Jesus Christ who has delivered me from your hands."

St. Macarius had commanded his disciples to hide his body, but some of the natives of the village of Shabsheer came and stole his body, built a church for him and placed the body in it for around 160 years. Later on, his body was moved to another town where he stayed for 440 years, till the time of Pope Michael V (also known as Mikhail II or III, depending on how one names and counts previous Coptic popes sharing the related names of 'Khail' and 'Mikhail'), the 71st Coptic Pope of Alexandria. When Pope Michael went to the wilderness to observe the holy fast in the monastery, he sighed and said, "How much I yearn that God would help us so that the body of our father Abba Macarius be in our midst."

Later on, the abbot of St. Macarius monastery went with some of the elders on a certain business of the monastery, and they thought of bringing back the body of the saint to their monastery. They came to where the body was, but the people of the town and the governor assembled against them and prevented them from taking the body. The elders spent the night in great sorrow. The governor saw that night a vision of St. Macarius telling him, "Let my children take my body and do not prevent them." The governor was frightened and he called the elders and gave them the body. The elders took the body with great joy, and many faithful people followed them to bid the body farewell.

As they reached the monastery, all the monks came out holding candles and singing. Then they carried the body on their shoulders and went into the church in a great celebration, and God performed many wonders on that day.