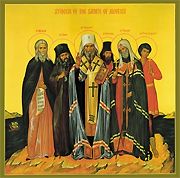 Synaxis of the Saints of America

Persons under consideration (whether formal or informal) for glorification:

Feast of All Saints of North America

The Orthodox Church in America remembers the saints of North America on the second Sunday after Pentecost.

As the bountiful harvest of Your sowing of salvation,
The lands of North America offer to You, O Lord, all the saints who have shone in them.
By their prayers keep the Church and our land in abiding peace
Through the Theotokos, O most Merciful One.

Today the choir of Saints who were pleasing to God in the lands of North America
Now stands before us in the Church and invisibly prays to God for us.
With them the angels glorify Him,
And all the saints of the Church of Christ keep festival with them;
And together they all pray for us to the Pre-Eternal God.