Difference between revisions of "Leo the Great" 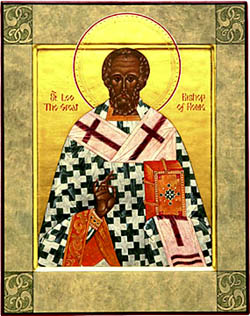 St Leo the bishop of Rome.
Our father among the saints, Pope Leo I, or Saint Leo the Great, was an aristocrat who was Pope of Rome from 440 to 461. He is the first widely known pope, and even sometimes assigned the title "first pope." He stopped the invasion of Italy by Attila the Hun in 452 by his moral persuasion, and was a theologian. His feast day is commemorated on February 18.

These were difficult times for the Church, when heretics assaulted Orthodoxy with their false teachings. Leo combined pastoral attentiveness with uncompromising firmness in the confession of the Faith. He was in particular one of the basic defenders of Orthodoxy against the heresies of Eutyches and Dioscorus, who taught that there was only one nature in the Lord Jesus Christ. He was also a defender against the heresy of Nestorius.