The Kursk Root Hermitage, also the Korennaya Hermitage, or Monastery of the Birth of the Theotokos "The Wonderworking Kursk Root Icon of Our Lady of the Sign" is a monastic community located in the village of Svodoba, about 21 miles (30 kilometers) from the city of Kursk, Russia. The monastery, consisting of the hermitage for men and a skete for women, was built upon the site where the Kursk Root icon was found and the Life-bearing Spring that arose at the place of its discovery.

The origins of the monastery trace back 300 years before its formal establishment, to events associated with the finding of the Kursk Root Icon. The monastery was founded on the site of the first chapel that was built over and dedicated to the Life-bearing Spring that appeared when the Kursk icon was first revealed. This spring still flows. A wooden chapel was built in 1295 immediately after the finding the Kursk Root icon and in which the miraculous icon was enshrined. 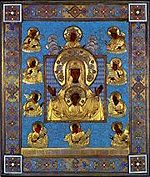 The Kursk Icon of the Theotokos

The Kursk Root Hermitage was established by Tsar Theodore Ivanovich in 1597 and named in honor of the appearance of the Icon of the Sign of Our Lady of Kursk-Korennaya that was found at the root of a tree. The wooden chapel was replaced by a stone church dedicated to the Kursk Root Spring and through which the spring still flows. Through the years the monastery expanded with the construction of a number of buildings. In the eighteenth century the monastery was rebuilt of stone.

On March 8, 1898, the interior of the cathedral at the hermitage was blown asunder two hours after midnight, awakening the brethren to a scene in the cathedral of great destruction. An atheist by the name of Ufimtsev had attempted to destroy the Kursk Root icon. The interior of the cathedral was seriously damaged. The north recess where the icon of the Mother of God usually resided was most seriously damaged. But, among the seriously burned and broken walls the precious icon was found intact and undamaged.

The monastery was greatly neglected during the years of the Soviet Union. The Root icon was taken from the monastery during the civil war and eventually ended up in the United States. The monastery itself was closed in the 1920s. The buildings of the hermitage were used for a technical school during which time the government tried unsuccessfully to restrict access to the spring. Also, in 1943 during World War II, the monastery grounds became the Central front headquarters of Marshal Constantine Rokossovsky during the great tank battle of Kursk. In the 1960s, attempts were made to bury the spring in concrete, but seepage of the spring water continued.

With the collapse of the Soviet Union, restoration of the hermitage began in March 1989 when a church near the spring in the village of Svoboda was returned by the government to the Russian Orthodox Church. Among the restorations is a new cemetery that replaces the old one that was destroyed during World War II. Restoration work in the monastery continues.

The modern day procession of the Icon of the Sign began in 1618 as an occasional event when the icon was taken from the Cathedral of the Sign (Znamensky) in Kursk to the Hermitage for a week before it was returned. These processions were in memory of the transfer of the icon from Moscow to Kursk and to commemorate its original appearance. Between 1726 and 1765, the procession was done annually. Disagreement developed between the cathedral and the hermitage over ownership of the icon. The dispute continued even though the monks at the hermitage were subordinate to the cathedral. So, in 1767, the Holy Synod terminated the procession of the icon between the cathedral and hermitage.

However, the merchants protested the absence of the processions. In 1792, the processions were renewed. With the renewal of the processions, the Korennaya Fair developed. The Holy Synod, with agreement of Emperor Alexander I, in an order of dated January 15, 1806 directed that the Kursk Root Icon of the Sign had to be in the Korennaya Hermitage temple from the ninth week after Pascha until September 12. Thus, each year on Friday of the ninth week after Pascha the Icon of the Sign was borne in solemn procession from the Cathedral of the Sign (Znamensky) in Kursk to the Kursk Root Hermitage where it remained until September 12. Then, on September 13, in another solemn procession it was brought back to Kursk.

In September 2009, Patriarch Kyril of Moscow consecrated the Church of the Nativity of the Theotokos in the hermitage from which the icon was carried in procession.