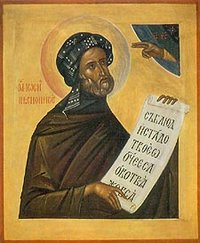 Our father among the saints Joseph the Hymnographer was a monk during the 9th century who was a strong defender of the reverence of icons during the iconoclastic period. He is remembered for being a prolific writer of hymns, as noted throughout the Parakletike.

When the heresy of iconoclasm returned, he again stood steadfast against the movement and was sent to exile in Cherson for eleven years. Upon his return in 842, during the reign of Empress Theodora, he was appointed keeper of the Sacred Vessels at the Cathedral of the Holy Wisdom. But, again he was exiled after denouncing Bardas, brother of the the empress, for illicit cohabitation. Joseph returned again to Constantinople in 867 after Bardas’ death.

His feast day is commorated on April 4.