Difference between revisions of "Jonah of Manchuria" 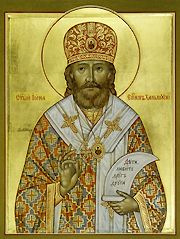 Our father among the saints Jonah (Pokrovsky), Bishop of Hankou (1888-1925), was a diocesan bishop of the Russian Orthodox Church Outside Russia (ROCOR) who served in Northern China in the years immediately following the Bolshevik Revolution.

The future St. Jonah was born on April 17, 1888 in Kaluga, Russia, with the name Vladimir (Volodya) Pokrovsky. He was orphaned at the age of 8 and was taken in by a kindly deacon, who ensured he received an education. He went on to attend, graduate, and eventually teach at the Kazan Theological Academy. While attending as a student, he was tonsured a monk of the Optina Brotherhood and given the name Jonah. He took a teaching position at the academy only out of obedience to the Elder Gabriel of Optina.

In 1918 the Revolution forced the young hieromonk to leave Kazan. He was arrested by the communists and suffered beatings to the point of loss of consciousness and imprisonment. Thus, sharing the fate of the New Confessors of Russia, by God's providence Hieromonk Jonah was freed by the White Army, which was situated beyond the Ural Mountains. Having been quickly raised to the rank of igumen, he was assigned as the senior priest of the southern volunteer troops. With the army of Ataman Alexander Dutov, Fr. Jonah withdrew to the borders of Western China, being subjected to all kinds of hardships while crossing the Pamir cliffs, often forced to grab on to jagged ledges and the sparse shrubbery of the ice covered cliffs with wounded hands. After crossing the Gobi Desert, they finally reached Beijing, where Fr. Jonah was received into the Ecclesiastical Mission there and soon consecrated bishop of Manzhuria. (St. Jonah was officially the bishop of Hankou, in the Hubei province, but actually ministered and worked in the town of Manzhuria, the modern day border town of Manzhouli, not to be confused with the region of Manchuria, of which this town is a part.)

During his short time as bishop, St. Jonah transformed the Orthodox community in Manzhuria. He established an orphanage, a school, and a dining hall for the poor. He worked tirelessly for his flock, and was deeply loved by them.

St. Jonah had been caring for a priest who died of typhoid fever. He subsequently contracted chronic tonsillitis and then, due to complications, developed blood poisoning. As he was dying, he wrote a final epistle to his flock, reminding them of the need to love one another, confessed one final time to Archbishop Methodius of Beijing, received Holy Communion, blessed those who were in his chamber, and then he then put on the epitrachelion and cuffs which had belonged to Elder Ambrose of Optina and began, loudly and with prostrations, to read the canon for the departure of the soul. Finally overcome with weakness, he laid down on his bed and said, "God's will be done. Now I shall die," and he indeed died within minutes.

That same evening, a ten-year-old boy named Nicholas Dergachev, who was crippled, had been suffering from an inflammation of the knee joints. All medical efforts had proven fruitless. He was unable to walk, or even to stand. The boy had a dream. A hierarch vested in white appeared to him and said, "Here, take my legs. I don't need them anymore. And give me yours." He woke up and was miraculously healed. From a photograph he identified the hierarch in his dream as Bishop Jonah, who had died that very night, October 7/20, 1925.

Though his life was short, his memory endured long after his repose. St. John (Maximovitch) said of St. Jonah:

"Already here in the diaspora we have righteous ones in our time. Although they are not yet glorified, people receive wondrous signs from them. For example Bishop Jonah of Manchuria." (From the book "Sermons," by St. John of Shanghai and San Francisco)

There was an attempt to excavate the relics of St Jonah in July of 1994 which was unsuccessful in locating the site of St Jonah grave (the grave marker had been destroyed by the Communists). In 1997, new information was provided that may have located the site, but so far no second attempt has been made.[1]

Thou didst not forbid the children to come to thee, O divinely blessed one,
Taking care for their daily needs, and establishing a safe haven for them.
And even after thy repose thou hast not forsaken them;
For in a dream thou didst heal a paralyzed boy.
Wherefore, we cry out to thee: Rejoice, O all-glorious wonderworker Jonah!