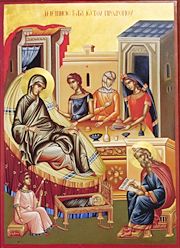 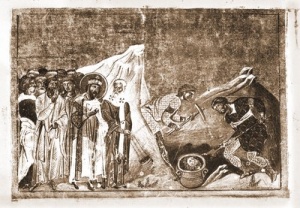 Miniature of the Finding of the head of St. John the Baptist (Menologion of Basil II, 10th c.).

The First Uncovering of the Head of St. John the Baptist took place in the fourth century at the time when Saint Constantine the Great and his mother, St. Helen, began restoring the holy places of Jerusalem.

The Second Finding of the Precious Head of St. John the Baptist of took place on on February 18, 452, at Emesa.

His relics are kept in several places including: