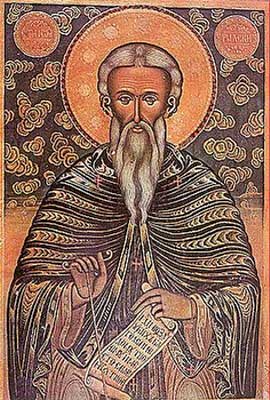 The rich man, who had been watching from a hidden place, became frightened as he saw this miracle. He pay the boy generously and released him from his service. Giving away his worldly things, John left his village to live in the barren countryside. When and where he took his monastic tonsure is unknown.

He began his ascetic life in a brushwood hut on a high, barren hill. For his food he gathered from the plants in the wilderness. But, soon he was attacked by robbers who beat him and drove him away. Finding a deep cave he settled there and was soon joined by his cousin Luke. The area around the cave was so unpopulated that John thought that Luke's appearance was a demonic trick, but he soon learned that the youth was looking for salvation of his soul. However, their lives together did not last long as John's brother found the ascetics and took his son away. On their way home, Luke was bitten by a snake and soon died. His brother repented his action and asked forgiveness of John. John would often visit the grave of his cousin, a place that became his favorite place of rest.

Once a flock of lost and frightened sheep came upon the place where John lived. Chasing their sheep, a group of shepherds were surprised to find the hermit who greeted them with an offer of beans to eat. As all ate, one shepherd gathered some beans to have in reserve. When, on their way home he offered the beans to his companions, they found no beans in the stolen pods. Turning back contritely, the shepherds were received again by John who quietly admonished them that the beans were only for subsistence in the wilderness.

Later, John began to take under his care monastics who begged him to accept them in their desire to follow his divine way of life. As these disciples grew in number they built a church in the cave he formerly lived in and soon formed a monastery. Five years before his repose, John wrote one of the finest creation of Old Bulgarian literature, his "A Testament to Disciples".