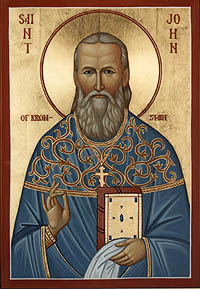 An icon of St. John of Kronstadt
Our righteous father John of Kronstadt (Иоанн Кронштадский; October 19, 1829, in Sura – December 20, 1908, in Kronstadt) was an archpriest of the Russian Orthodox Church.

He was born as Ivan Ilyich Sergiyev (Иван Ильич Сергиев) in 1829. From 1855, he served as a priest in St. Andrew's cathedral in Kronstadt. Here, he greatly committed himself to charity, especially for those who were remote from the church, and traveled extensively throughout the Russian empire. He was a member of the right extremist movement Sojuz Russkogo Naroda (Alliance of the Russian people) but did not commit himself politically. He was already greatly venerated at the time he died. He was glorified by the Russian Orthodox Church Outside of Russia in 1964 and by the Russian Orthodox Church on June 8, 1990. St. John Maximovitch of Shanghai and San Francisco played an active role in preparation of St. John's canonization.

Many churches around the world and Ioannovsky Convent, the second largest monastery in St. Petersburg (by community size) are dedicated to St. John of Kronstadt.

His feast days are commemorated on December 20 and October 19. 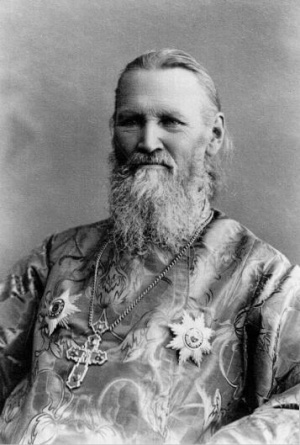 Photo of St. John of Kronstadt

"When you are praying alone, and your spirit is dejected, and you are wearied and oppressed by your loneliness, remember then, as always, that God the Trinity looks upon you with eyes brighter than the sun; also all the angels, your own Guardian Angel, and all the Saints of God. Truly they do; for they are all one in God, and where God is, there are they also. Where the sun is, thither also are directed all its rays. Try to understand what this means."

"There is nothing impossible unto those who believe; lively and unshaken faith can accomplish great miracles in the twinkling of an eye. Besides, even without our sincere and firm faith, miracles are accomplished, such as the miracles of the sacraments; for God's Mystery is always accomplished, even though we were incredulous or unbelieving at the time of its celebration. "Shall their unbelief make the faith of God without effect?" (Rom. 3:3). Our wickedness shall not overpower the unspeakable goodness and mercy of God; our dullness shall not overpower God's wisdom, nor our infirmity God's omnipotence." — My Life in Christ

"Oh, what great happiness and bliss, what exaltation it is to address oneself to the Eternal Father. Always, without fail, value this joy which has been accorded to you by God's infinite grace and do not forget it during your prayers; God, the angels and God's holy men listen to you."

"The enemy of our salvation especially strives to draw our heart and mind away from God when we are about to serve Him, and endeavours to adulterously attach our heart to something irrelevant. Be always, every moment, with God, especially when you pray to Him. If you are inconstant, you will fall away from life, and will cast yourself into sorrow and straitness."

"Do not be despondent when fighting against the incorporeal enemy, but even in the midst of your afflictions and oppression praise the Lord, Who has found you worthy to suffer for Him, by struggling against the subtlety of the serpent, and to be wounded for Him at every hour; for had you not lived piously, and endeavored to become united to God, the enemy would not have attacked and tormented you."

"Do not fear the conflict, and do not flee from it; where there is no struggle, there is no virtue. Our faith, trust, and love are proved and revealed in adversities, that is, in difficult and grievous outward and inward circumstances, during sickness, sorrow, and privations."

"Prayer for others is very beneficial to the man himself who prays; it purifies the heart, strengthens faith and hope in God, and arouses love for God and our neighbor."

As a zealous advocate of the Orthodox faith,
As a caring Solicitor for the land of Russia,
Faithful to the rules and image of a pastor,
Preaching repentance and life in Christ,
An awesome servant and administer of God's sacraments,
A daring intercessor for people's sake,
O Good and righteous Father John,
Healer and wonderful miracle-worker,
The praise of the town of Kronstadt
And decoration of our Church,
Beseech the All-Merciful God
To reconcile the world and to save our souls!

With the apostles your message has gone out to the ends of the world,
And with the confessors you suffered for Christ!
You are like the hierarchs through your preaching of the word;
With the righteous you are radiant with the grace of God.
The Lord has exalted your humility above the heavens
And given us your name as a source of miracles.
O wonder-worker, living in Christ for ever,
Have mercy on those beset by troubles;
And hear us when we cry out in faith, O our beloved shepherd John!

This day the pastor of Kronstadt
Appears before the throne of God
Praying fervently on behalf of the faithful
To the chief pastor Christ, who has promised:
"I will build my church, and the powers of death shall not prevail against it!"