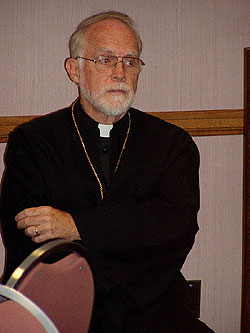 Father John Breck (1939- ) is an archpriest and theologian of the Orthodox Church in America specializing in Scripture and Ethics. He has been Professor of Biblical Exegesis and Patristics at the St. Sergius Orthodox Theological Institute (Paris, France), and Director of the Saint Silouan Retreat on Wadmalaw Island, South Carolina, since 1995.

Breck received his B.A. in Religious Studies from Brown University (1960), an M.Div. (Master of Divinity, the basic seminary degree for those seeking ordination) from Yale Divinity School (1965), and a Doctorate of Theology from the Ruprecht Karl University of Heidelberg in Germany (1972). In 2003 he was awarded an honorary doctorate from the University of Cluj-Napoca in Romania.