Jakob (Akkersdijk) of The Hague 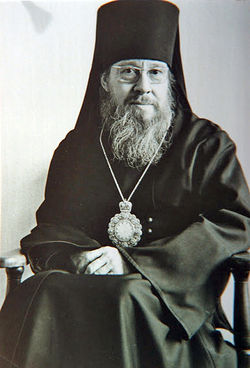 Archbishop Jakob or Jacob (secular name Jacobus Hubertus Antonius Akkersdijk[1]), August 13, 1914 - July 26, 1991, was the Archbishop of The Hague and the Netherlands, of the Russian Orthodox Church.

Archbishop Jakob was born on August 13, 1914 to a Dutch family,[2] and was baptised into the Roman Catholic Church on August 14.[3]

He later became a novice in a Benedictine Catholic monastery in Belgium.

After meeting with hieromonk Dionysius (Lukin), he decided to adopt Orthodoxy. He was received on May 10, 1940 by Chrismation, and his friend, monk Adrian Korporaal also followed him in accepting Orthodoxy.

In 1952, the Archbishop of Brussels and Western Europe John (Maximovich) visited their small parish. Being a supporter of rebuilding national Orthodox Churches in Europe, Bishop John approved of the activities of the Orthodox Dutch missionaries, and offered that they turn to him for help if required.

In 1954, the community joined the Diocese of Archbishop John, who then ordained Jakob as a Hieromonk, and appointed him as priest of the parish of St. John the Baptist, which was elevated to a nunnery. Its core was formed by Benedictine nuns, who came to Orthodoxy. This monastery's mission was to provide a witness for Orthodoxy to the local people. Owing to Archbishop John's support, Jakob managed to defend the Dutch language for liturgical use and to continue his missionary work. On August 10, 1958 he was elevated to the rank of hegumen. 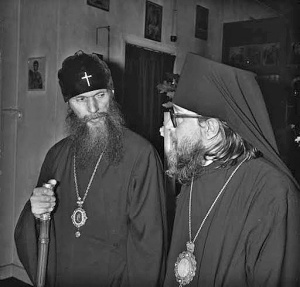 With the transfer of Archbishop John overseas in 1962, the Dutch parishes were left without pastoral care. In this regard, at the insistence of Archbishop John, Hegumen Jakob (Akkersdijk) was elected as Bishop of The Hague, and Vicar of the Western European Diocese (ROCOR).

Thus on February 21, 1965 was elevated to the rank of Archimandrite. And on September 19, 1965, in the church of Saint Job the Suffering in Brussels, he was consecrated bishop of the Hague, and Vicar of the Western European Diocese, and was appointed Chief of the Dutch Orthodox Mission. The Consecration was performed by Metropolitan Philaret (Voznesensky), Archbishop Anthony (Bartoshevich) of Geneva and Bishop Nathaniel (Lvov).

After the death of the Archbishop John in 1966, Bishop Jakob's flock lost the assisstance and protection which he had rendered the Dutch diocese. In general, after the death of Metropolitan Anastasius (Gribanovsky) and St. John (Maximovich), the spirit of isolationism prevailed in the ROCOR, with the desire to make all Western Rite and New Calendarist parishes to serve by the Old Calendar, and only according to the Russian liturgical tradition. Thus, the Hague Diocese found itself in isolation.

With Church of Russia

In 1971 Bishop Jakob left the ROCOR, together with his community and two monasteries, since the ROCOR Synod of Bishops did not allow him to celebrate the holidays according to the Western calendar.[4]

On August 18, 1972, by decision of the Holy Synod of the Russian Orthodox Church, Bishop Jakob was admitted together with all of the clergy and flock, and was appointed the ruling bishop of the newly formed Diocese of The Hague and the Netherlands.