His Beatitude the Most Reverend Metropolitan Ireney (Bekish) of New York succeeded Metr. Leonty as primate of the Russian-American Metropolia upon his death. Under his leadership the central administration continued to mature and negotiations actively began with the Patriarch of Moscow to resolve the ill feelings that had developed since the Bolshevik Revolution, and which resolved into the granting of autocephaly to the Metropolia as the Orthodox Church in America.

John Bekish was born on October 2, 1892, in Mezhirech in Lublin province, which today is in southeast Poland, but then was part of the Russian Empire. He attended the Kholm Seminary, graduating in 1914. During the next two years he married and was employed as a reader, until 1916 when he entered the clergy. After ordination as a deacon, he was ordained a priest by Bishop Seraphim of Belsk on August 1, 1916. During the next several years Fr. John served successively at a number of parishes including Guscha in the Lublin region, Lishnevka in the Kovel region, Belskoye in the Sarnen region, and Poliza also in the Sarnen region. Then, in 1934, Fr. John was appointed rector of the parish in Kamen-Kashirsk and was advanced to the rank of Archpriest.

On January 1, 1935, he was appointed to the Consistory of the Polish Orthodox Church, and then a year later was appointed assistant rector of the Cathedral in Pinsk. Eleven months before the Nazi and Soviets invaded Poland he was appointed chairman of the Luninetz Missionary Committee. In July 1944 as the Soviet army, who were now fighting the Nazis, approached, Fr. John evacuated with his family to Germany where he ministered to Orthodox faithful in the displaced persons' camps until after the end of World War II. In October 1947, Fr. John was raised in rank to Mitred Archpriest and was moved to Belgium where he was assigned rector of the Holy Trinity Church in Charleroi, Belgium.

On March 20, 1952, Fr. John arrived with his family in the United States and was assigned as the priest of Holy Trinity Church in McAdoo, Pennsylvania. On March 31, 1953, his wife Xenia died and was buried in the Holy Trinity cemetery in MacAdoo.

After being elected Bishop of Tokyo, then a diocese in the Metropolia, Fr. John was tonsured a monk on May 28, 1953, and given the name of Ireney. He was also raised to the rank of archimandrite. His consecration as Bishop of Tokyo was conducted by Metropolitan Leonty (Turkevich) on June 7, 1953, with other hierarchs in the Holy Virgin Protection Cathedral in New York City. As bishop of Tokyo, Bp. Ireney continued to lead the Japanese Church in its recovery from World War II. He reopened the seminary at Nicolai-do Cathedral and brought back Victor Pokrovsky as the choir director for the cathedral. On May 9, 1957, Bp. Ireney was raised to the rank of archbishop.

Transferred back to the United States on June 14, 1960, Abp. Ireney was appointed Archbishop of Boston and of the Diocese of New England. He was also made a special assistant to Metr. Leonty who was aging and ailing. With Metr. Leonty's death on May 14, 1965, Abp. Ireney was elected Locum Tenens by the Great Council of Bishops pending the election of a new Metropolitan. At the 12th All-American Sobor on September 23, 1965, Abp. Ireney was elected and installed as Archbishop of New York and Metropolitan of all America and Canada. 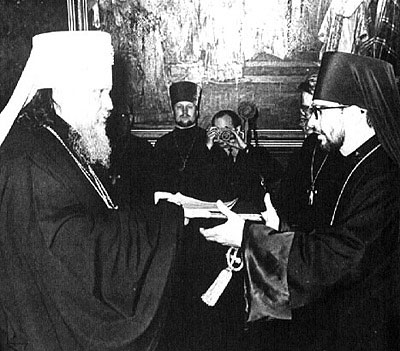 Metr. Ireney's time in office would provide one of the momentous events in the history of the North American church as at first feelers turned to negotiations and finally into agreements that resolved the decades of tensions and disagreements between the Mother Church, the Church of Russia, and the offspring American Metropolia. The Russian Orthodox Church issued a Tomos confirming and proclaiming The Russian Orthodox Greek Catholic Church in North America an autocephalous Church named The Orthodox Church in America. With the change in status of the Church came a change in title of address for the first hierarch. At a session of the Holy Synod of the Bishops of the Orthodox Church in America on June 9, 1970, the Synod granted the title of His Beatitude to Metropolitan Ireney, as the primate of an autocephalous Church.

By 1974, age began to take its toll on Metr. Ireney. In early 1974, Metr. Ireney requested that the Holy Synod elect a temporary Administrator for the day-to-day business of the Church. On May 15, 1974, Archbishop Sylvester (Harums) of Montreal and Canada assumed this position, working with Metr. Ireney who would approve all important actions and decisions. As his health deteriorated, Metr. Ireney announced on March 9, 1977, that he intended to retire on October 25, 1977, the opening day of the 5th All-American Council. With the election of Bishop Theodosius (Lazor) as the new Metropolitan, Metr. Ireney retired to live in the Ss. Cosmas and Damian Adult Home on Staten Island, New York, an institution that he was instrumental in founding.