From OrthodoxWiki
Revision as of 13:21, May 31, 2005 by ASDamick (talk | contribs) (Imported article from Wikipedia with some editing)
(diff) ← Older revision | Latest revision (diff) | Newer revision → (diff)
Jump to: navigation, search 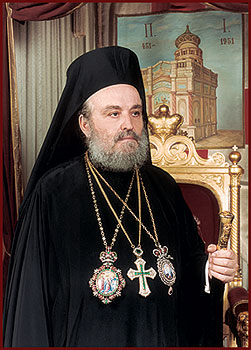 He was enthroned on September 15, 2001 as the 140th Patriarch of the Holy City of Jerusalem and All Palestine, Syria, beyond the Jordan River, Cana of Galilee and Holy Zion in the presence of senior church and secular dignitaries, including Archbishop Christodoulos of the Church of Greece and Metropolitan Nicholas of the Czech and Slovak Orthodox Church.

He was born on the Island of Samos]] in [[Greece and came to Jerusalem in 1953 and served for many years as exarch of the Holy Sepulchre in Athens.

Only a few years into Irenaios's patriarchate, he became embroiled in bitter controversy. Several parcels of church-owned land in the Old City of Jerusalem were sold to Israeli developers. As most of the Orthodox Christians in the region are Palestinian, and the land was in a Arab-populated area that most Palestinians hoped would become as a part of a future Palestinian capital, this caused a great deal of outrage among Church members. On May 5, 2005, most of the Holy Synod of Jerusalem announced in a letter they had broken off contact with Patriarch Irenaios, and regard him as dismissed as Patriarch of Jerusalem.

On May 24, 2005, a special Pan-Orthodox synod was convened in Constantinople to review the decisions of the Holy Synod of Jerusalem. The Pan-Orthodox Synod under the presidency of Ecumenical Patriarch Bartholomew I (Archontonis) of Constantinople voted overwhelmingly to confirm the decision of the Brotherhood of the Holy Sepulcher and to strike Irenaios's name from the diptychs, and on May 30, Jerusalem's Holy Synod chose Metropolitan Cornelius of Petra to serve as locum tenens pending the election of a replacement for Irenaios.