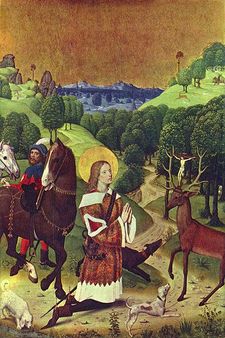 Our father among the saints Hubertus of Maastricht', also Hubert of Liège, was a noble in the Merovingian nobility of the seventh/eighth centuries in Western Europe who, following an experience while deer hunting, gave up his heritage to follow The Lord. Called the "Apostle of the Ardennes", he was the first Bishop of Liège. His feast day in November 3.

Hubert was born about 656, probably in Toulouse, the eldest son and apparent heir of Bertrand, Duke of Aquitaine.[1] As a youth, Hubert was sent to the Neustrian court of Theuderic III at Paris. Like many nobles of the time, Hubert was addicted to the chase. But, the tyrannical conduct of the mayor of the Neustrian palace, Ebroin, caused an emigration of the nobles to the court of Austrasia at Metz. Hubert soon joined them. He was warmly received by Pippin of Heristal, mayor of the palace, who made him almost immediately grand-master of the household.

In 682, Hubert married Floribanne, daughter of Dagobert, Count of Leuven. Floribanne, however, died giving birth to their son Floribert, who later became bishop of Liège. With the death of his wife, Hubert left the court and withdrew into the Ardennes forest. There, he gave himself up entirely to hunting. While hunting on a Good Friday morning, when the faithful were at church, Hubert pursued a magnificent stag that turned to face him. Hubert was astounded at seeing a crucifix standing between its antlers and heard a voice saying, "Hubert, unless you turn to the Lord, and lead a holy life, you shall quickly go down to hell". Hubert dismounted, prostrated himself and said, "Lord, what would You have me do?" Whereupon he received the answer, "Go and seek Lambert, and he will instruct you."

Hubert, then, set out for Maastricht, to the see of Bishop Lambert. Received kindly by Bp. Lambert, Hubert was named his spiritual director. He now renounced all his honors, surrendered his birthright to the Aquitaine to his younger brother Odo, whom he also made guardian of his infant son, Floribert, and distributed all his personal wealth among the poor. After studying for the priesthood, Hubert was soon ordained, and shortly afterwards became one of Bp. Lambert's chief associates in the administration of his diocese.

While on a pilgrimage to Rome in 708, a trip made at the advice of Bp. Lambert, his mentor was assassinated by the followers of Pippin. Then, according to the hagiographies of Hubert, this crime was also revealed to the pope in a vision, together with an injunction to appoint Hubert bishop of Maastricht.

As bishop, Hubert distributed his revenues among the poor, was diligent in fasting and prayer, and became famous for his eloquence in the pulpit. In 720, in obedience to a vision, Hubert, with great ceremony, translated Lambert's relics from Maastricht to Liège, assisted by several neighboring bishops. A [[basilica] for the relics was built upon the site of Lambert's martyrdom. The church was elevated to a cathedral the following year and the see transferred from Maastricht to Liège.

His evangelization of the pagans in the Ardennes forests and in the area of Toxandria, that now in part of Netherlands and Belgium, brought him the title of Apostle of the Ardennes. While he identified some of the old idolatrous places of worship, he permitted the new converts to decide for themselves to destroy the old idols, which they all, naturally, did.

Having predicted the date of his own death, Bp. Hubert died peacefully in Fura, Brabant on May 30, 727 and was buried in the collegiate church of St. Peter in Liège. In 825, his relics were translated to the Benedictine Abbey of Amdain, present-day Saint-Hubert, in the Ardennes. However, during the Protestant Reformation his coffin disappeared. His feast day of November 3 is probably the date of the translation of his relics to Amdain.

The story of the stag and Hubert's conversion was first attributed to St. Hubert in the fifteenth century and is similar to the legend of St. Eustace (Placidus). St. Hubert is patron of archers, dogs, forest workers, hunting, huntsmen, mathematicians, metal workers, smelters, and trappers.