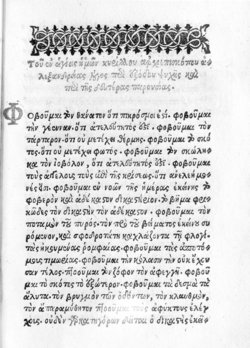 Horologion, Venice 1535
The Hours are four relatively brief prayer services of the Daily Cycle that mark the various principal hours of the day.

These services, together with the other services of the Daily Cycle, are usually contained in a bound collection called the Book of Hours, also known as the Horologion (Greek) or Chasoslov (Slavonic).

General Structure of the Hours

Each of the services of the Hours shares the same general structure.

During the Nativity Fast and the Apostles' Fast, each of the First, Third, Sixth, and Ninth Hours is followed by an additional service called a Mesorion (inter-hour). The Mesorion starts immediately after the final prayer.

On the eves of the feasts of Nativity and Theophany and on Holy Friday, the usual services of the Hours are combined and replaced by the more solemn Royal Hours. The Royal Hours include hymnography, prayers, and scripture readings related to the feasts they anticipate.

During Bright Week the Hours (as well as certain other services of the Daily Cycle) are replaced by the festive Paschal Hours. The Paschal Hours are intended to reflect the joy and celebration of Pascha. The hymnography and prayers center on Christ's victory over sin and death and our hope for salvation.

Theological Meaning of the Hours

This article or section is a stub (i.e., in need of additional material). You can help OrthodoxWiki by expanding it.
Retrieved from "https://orthodoxwiki.org/index.php?title=Hours&oldid=115737"