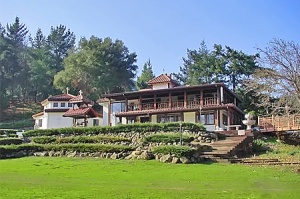 Holy Cross Monastery from the East
Holy Cross Orthodox Monastery is a monastic institution of the Orthodox Church in America located in Castro Valley, California.

The clergy of the monastery previously served under the omophorion of Archbishop Kyrill, who shepherded the OCA's Diocese of Pittsburgh, Pennsylvania and the Diocese of Toledo, Ohio. Since the repose of Archbishop Kyrill during the summer of 2007; they now serve under the omophorion of [Herman (Swaiko) of Washington and New York|Metropolitan Herman], who serves as locum tenens of their diocese until a new hierarch is elected and installed. Holy Cross Monastery serves Orthodox Christians of all ethnic backgrounds and all cultural traditions. Services are predominantly celebrated in English, but are often also heard in Romanian, Slavonic (also known as Old Bulgarian), and Greek. Many Orthodox Christians with roots in Romania and Bulgaria regularly attend services at the monastery. Orthodox faithful of all backgrounds come here for weddings, baptisms, and other sacramental blessings. Elegant dining space and a covered portico are available for receptions. Spiritual day retreats have been held here by OCA churches, neighboring Greek Orthodox parishes, and by many other Orthodox groups.

Services at Holy Cross Monastery are usually conducted in the languages best understood by those worshipping with the fathers, who can conduct services in Romanian, Slavonic ("Old Bulgarian"), Greek, or English as the need arises.

Beginnings of the monastery

Holy Cross Monastery began with its abbot, Archimandrite Theodor. He always dreamed of founding a monastery one day for the greater glory of God. In 1965, while he was very young and after he had been ordained as a priest for just one year, his devout mother suddenly and unexpectedly fell asleep in the Lord. He was the only son of his parents, and his mother left her inheritance to him; since she knew of his holy intention to build a monastery one day.

It took the monks nine additional years to save enough money to buy property suitable for a monastery, and then, in 1979, with the blessing of their diocesan bishop, they purchased a rural estate that would eventually be consecrated as Holy Cross Monastery. The monks themselves have performed most of the labor that has transfigured this rustic property into a frontier of Paradise. They have also stacked every stone in their retaining walls and planted the trees in the cloister precincts. The majestic redwood trees that tower behind their cross shrine were planted by the fathers themselves from one-gallon cans in 1980, during the first summer following their arrival here. 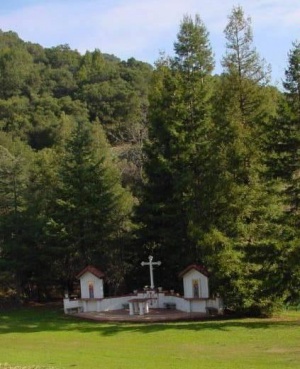 Facing East toward the Cross Shrine of Holy Cross Monastery with redwood trees planted by the fathers in the background, photo taken January 2005

The fathers do their utmost to make every visitor feel that their monastic dwelling is a spiritual home to anyone who comes to them for spiritual nourishment. Holy Cross Monastery exists as a haven of spiritual tranquility, tolerance, and kindness—not only for the local owls, deer, foxes, and raccoons—but for all who come to partake of the monastery's peace and befriend the Fathers. The beauty and harmony of the monastery and its environs speak for themselves and speak to the soul and heart of anyone who loves God, humankind, and nature.