Difference between revisions of "Haralampus of Magnesia" 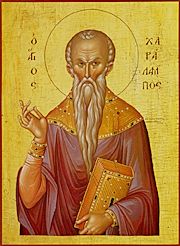 Icon of Saint Charalampus at Skete.com
The holy, glorious, right-victorious martyr Charalampus (or Haralambos) was a priest in the city of Magnesia in Thessaly during the late second and early third century. He was martyred, having openly preached the Gospel during persecutions during the reign of Alexander Severus (222-235), when Lucian was Proconsul of Magnesia. His feast is commemorated on February 10.

Haralambos is a most wonderful saint who lived to a very old age. He was 113 when he was tortured and later martyred. The emperor was Severus and he had appointed Lucian as the governor of the territory of Magnesia where Haralambos was a priest. Lucian was upset that Haralambos was converting so many pagans. He had him arrested and commanded him to honor the stone gods. Well, he could not do this so Lucian began to torture him. They used a tool that would flay the skin and they cut his skin to shreds. All the while, Haralambos is giving thanks to our Lord. His strength amazed the executioners and they were converted. Th military commander, Lucius, was angry had his two officers Porphyrios and Vaptos beheaded. There were three other women who were also converted and they were also killed. Then miraculously the generals hands were severed at the elbow and he saw them hanging from the the martyr's body. Fear spread throughout the city. People began to beg mercy from the God Haralambos professed. The general begged for mercy from Haralambos. The Lord’s voice was heard and instantly all those injured were healed. The General was converted and baptized. The Governor Lucian stopped persecuting the Christians until he could report back to emperor. Meanwhile Haralambos was performing many miracles, healing the sick, curing the blind, and even raising some from the dead. The whole region came to believe in Jesus Christ. Severus, when he heard about this from Lucian, was outraged and sent in three hundred troops to arrest Haralambos and drive spikes into his spine. They were to drag him from Magnesia to a nearby town. But after they had dragged him about a mile and a half, two of the soldiers horses began talking to the soldiers in a great voice calling them minions of the devil. The horse said to free Haralambos least they be harmed. This frightened them and they stopped the torture.

The devil, in the guise of an old man, came to Severus and told him that Haralambos was a magician and had captured his whole army. At this time Haralambos was brought to Severus. He ordered that a skewer be made to pierce his chest so they could hang him over a fire. There were two witnesses to this torture by fire. One was the emperor’s concubine and the other her sister. They assisted with the torture. The sister could not tolerate this torture of such a good man and begged for Haralambos to receive her as a Christian. The fire died out and Haralambos was untouched by it.

The emperor was frustrated and brought Haralambos in for his questioning. He brought a person who had been tormented by a demon for thirty six years to see if Haralambos could exorcise this demon. This he did. Severus was amazed and exclaimed “Truly, great is the God of the Christians.” The emperor then brought before him a lad who had been dead for three days and the lad was resurrected by the prayers of Haralambos. All gathered were converted. Severus’ prefect Crispus was angered and asked that the emperor put Haralambos to death. Again Haralambos refused the demands of Severus to honor his gods and the emperor ordered that his face be crushed with stones. Once they bashed his face with stones, they were to apply torches to burn his beard and face. When they applied the fire, the flames leapt forth and spread, burning those present instead. The emperor remembered the words of the wise old man who had told him that Haralambos was a sorcerer. Severus asked his deputies about who is the Christ. Aristtarchos stepped up to tell the truth about Jesus Christ. The emperor angered, declared war on heaven challenging Christ to come down from heaven so he could fight him. He exclaimed, “Come down O christ to earth, that we might fight. Behold, my army will war against Thee, If thou will not come down, I will pull down the firmament and extinguish the sun!!” At this moment there was a great earthquake. In some way, Severus and Crispus were suspended in midair.

The emperor’s daughter, Galeenee, enters the picture. She begs her father to believe in Christ and ask that Christ deliver him from punishment. She then venerated the saint and asked that the punishment of Severus be stopped and it did. The two retreated to their palace for three days. Meanwhile his daughter had a vision of paradise and that the guardian carried her and set her down next to a cedar tree. Haralambos explained to here that this was the Paradise promised by Christ and the one who had placed her next to the tree was Jesus Christ and that she had this vision because of her belief in Christ.

After thirty days, the emperor again summoned the priest, asking him again to honor the commands of the emperor, and he again refused. This time Severus had his men place a hoses bit in Haralambos’ mouth as if he was an irrational beast. His daughter Galeenee begged her father to stop this torture. But he did not listen to her and Haralambos was paraded through the streets as a beast of burden. Galeenee was relentless and the emperor turned to her and asked her if she worshiped the gods. She told him that she did. Hearing this he released Haralambos elated that his daughter had forsaken the God of Haralambos. Galeenee then took Haralambos to the temple. He was silent. She them challenged the gods and mocked their impotence. She took hold of the statue of Apollo and pulled him to the ground along with thirty-four other stone statues of gods. Severus was dismayed and ordered that they be rebuilt that very night so the Galileans would not mock him. He told the workers to tell them that they had risen from the dead. Galeenee again destroyed them. This time Severus went into a rage and chastised her but could not bring himself to any punishment. He returned to harass Haralambos by assigning his to a widow. Thinking that this woman would corrupt Haralambos, instead many miracles were worked by him and she was converted.

This time Crispus demanded that Haralambos be beheaded. The emperor pronounced the sentence. The saint chanted holy hymns on the way to his execution. The event is describes as follows: He began to pray thus: “ I ever give thanks to thee, O Lord my God, for thou are merciful and the Lover of mankind. Thou, O Almighty, hast cast down our enemy, the evil, and taken Hades captive, and put death to death, thus delivering the race of man. Remember me, O Lord, in thy kingdom.” After he had prayed in this manner, the heavens opened. The Lord, with a multitude of His angels, came down. It was a spectacle full of wonder. The Lord was seen to be sitting on a throne of pearl. He said to His holy priest and martyr, “Come, my pleasing and beloved one who, for My name’s sake, suffered such ill-treatment and hardships. Ask of Me whatsoever gift thou dost wish, and I shall grant thine entreaty.”

Haralambos answered, “That Thou hast, by Thy grace, vouchsafed me, the lest person, to behold the awesome glory of Thy presence, this is, in itself, a tremendous gift. But if it please thy goodness to command me to ask a gift of Thee, I beseech thy majesty and dominion to grant this favor: to whomever should find of possess a portion of my relics, and in whichsoever land he may be celebrating the memory of my martyrdom, may he never suffer from hunger or plague of pestilence or an untimely death or destruction from an evil man, or injury to crops. I pray that he be in firm peace, salvation of soul, and health of body. I entreat that he enjoy plenty of wheat, oil and wine, together with an abundance of livestock and other good and useful possessions. And to whosoever should read the account of my martyrdom, and invoke my name, I supplicate for his salvation and that he should not suffer evil. Since thou knowest that men are but flesh and blood, and that they are in the Thine immaculate hands, I beseech Thee for the forgiveness of their sins. Do Thou pardon the sins of such faithful ones, as Thou are good and the Lover of mankind. Do Thou also, O Lord, keep the oxen of such in health, and all their animals and livestock, that they may cultivate the earth and abundantly enjoy her fruits, to the glory of thy name.” Haralambos then surrender his soul to the Lord. Severus in awe did not punish his daughter seeing that the God of the Christians was with her.