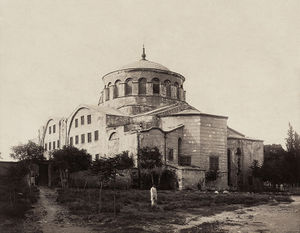 The Church of Hagia Eirene, Greek: Ἁγία Εἰρήνη, Holy Peace or Divine Peace, commonly rendered incorrectly in English as St. Irene, is a former Orthodox Christian church located in the outer courtyard of the Topkapi Palace in the ancient area of Constantinople in Istanbul, Turkey. Since the fall of Constantinople in 1453 to the Ottoman Turks, the church has been used variously as an armory, warehouse, museum, and concert hall.

Traditionally, the site of Hagia Eirene was occupied by a pre-Christian temple and an earlier small church that were demolished during the reign of emperor Constantine I in the early decades of the fourth century to be replaced by a much larger church that was dedicated to the Divine Peace. Upon its dedication, Hagia Eirene served as the cathedral of Constantinople until the completion of Hagia Sophia in 360.

The Second Ecumenical Council took place in Hagia Eirene from May to July 381. During the Nika riots of 532, the church was burned along with Hagia Sophia. Restored in 548 by emperor Justinian I, as a domed basilica, Hagia Eirene served again as the cathedral of Constantinople during the rebuilding of Hagia Sophia. The church was again damaged during an earthquake in 740 and was restored, in 753, to its present state by the iconoclast emperor Constantine V. The large cross in the half-dome above the narthex, where the image of the Pantocrator or Theotokos is usually placed, is a vestige of iconoclastic art incorporated during Constantine's restoration. During the eleventh and twelfth centuries the church was enlarged.

The Constantine V Cross in the narthex

After the fall of Constantinople in 1453 to the Ottoman Turks the church was enclosed inside the walls of the Topkapi palace, but was never converted into a mosque. Initially, the church was used as an armory by the Janissaries, including the storage of war booty. In the early eighteenth century it became a weapons museum before coming a museum of military antiques in 1846.

In 1978, the Church of Hagia Eirene was transferred to the administration of the Turkish Ministry of Culture and has served as a concert hall for classical music performances due to its exceptional spatial and acoustic qualities.

Construction of the present structure of the Church of Hagia Eirene began as the replacement of the earlier church destroyed during the Nika riots. Hagia Eirene is a domed, three-aisled basilica in the architectural style that emerged in Constantinople in the late fifth-early sixth century. The dome of the church collapsed during the earthquake of 740. The building remained in ruins until rebuilt by emperor Constantine V around 753. During this restoration, the church acquired a cross-domed unit and the elliptical, domical vault over the western part of the naos as well as an atrium and a seven-stepped synthronon with a kyklion, a vaulted passage under the synthronon. Also, substantial changes were made in the vaulting system throughout the building that significantly improved its stability against earthquakes. The vault of the semi-dome of the apse of the bema was given a slightly pointed shape and was decorated with the simple, two-dimensional mosaic of a stepped cross. The cross is outlined in black tesserae set against golden background. The cross, which resembles images of the Cross of Golgotha, suggests the beliefs of Constantine V and other iconoclasts for whom only the Cross and the Eucharist were acceptable images of Christ.

After the Ottomans took possession of Hagia Eirene only minor architectural changes were made to the building: the floor level of the church was raised, and the arcades were altered slightly, while infilling of original openings and addition of side chambers were made.