Difference between revisions of "Gregorios (Theocharous) of Thyateira and Great Britain" 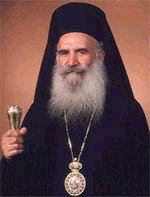 In 1951 he transferred to the Pan-Cypriot Gymnasium, Nicosia, having become a rasophore, and he was later ordained deacon on the Sunday of Pentecost, 1953, at the Church of St. Sava in Nicosia by the late Archbishop Makarios the Third. He graduated from the Gymnasium in 1954 and went to Athens to study at the Theological School of the University. Before receiving his university degree in February 1959, he was appointed to the Church of All Saints in London. He arrived there and started his duties at the Church of the Holy Saints in Camden Town in April 1959. He was ordained presbyter by the late Archbishop of Thyateira, Athenagoras (Kawadas), on the 26th of the same month.

On 16 April 1988 he was unanimously elected by the Sacred Synod of the Ecumenical Patriarchate as Archbishop of Thyateira and Great Britain and his enthronement took place at the Cathedral of Sophia in West London. His tireless program sees him attending many community events, both in London and around the country. His quiet and reasoned voice upholds both the concerns of the Greek Orthodox community and expresses the Christian message of peace and reconciliation. During the Kosovo conflict, in 1999, between the local Albanians and the Serbian army where NATO forces intervened, he was interviewed on BBC radio. Through his questions, the journalist appeared keen for Gregorios to side with the (fellow) Orthodox Serbs and criticize NATO. His Eminence simply stated that it was time for reconciliation and especially a time "of repentance for all of us."