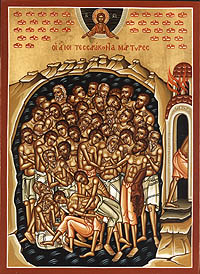 St Constantine the Great issued an edict in the year 313, granting Christians religious freedom, and officially recognizing Christianity as equal with paganism under the law. But Licinius, his co-ruler and a pagan, continued to persecute the Christians of the East. He also purged Christians from his own army, fearing mutiny.

According to St. Basil, forty soldiers who had openly confessed themselves Christians were condemned by the prefect to be exposed naked upon a frozen pond near Sebaste on a bitterly cold night, that they might freeze to death. Among the confessors, one yielded and, leaving his companions, sought the warm baths near the lake which had been prepared for any who might prove inconstant. One of the guards set to keep watch over the martyrs beheld at this moment a supernatural brilliancy overshadowing them and at once proclaimed himself a Christian, threw off his garments, and placed himself beside the thirty-nine soldiers of Christ. Thus the number of forty remained complete. At daybreak, the stiffened bodies of the confessors, which still showed signs of life, were burned and the charred bones were cast into a river so that Christians would not gather them up.

Three days later the martyrs appeared in a dream to St Peter, Bishop of Sebaste, and commanded him to bury their remains. The bishop together with several clergy gathered up the relics of the glorious martyrs by night and buried them with honor.

Relics were distributed throughout many cities; in this way the veneration paid to the Forty Martyrs became widespread, and numerous churches were erected in their honour. One of them was built at Caesarea, in Cappadocia, and it was in this church that St. Basil publicly delivered his homily. St. Gregory of Nyssa was a special client of these holy martyrs. Two discourses in praise of them, preached by him in the church dedicated to them, are still preserved (P. G., XLVI, 749 sqq., 773 sqq.) and upon the death of his parents, he laid them to rest beside the relics of the confessors. St. Ephraem, the Syrian, has also eulogized the forty Martyrs (Hymni in SS. 40 martyres). Historian Sozomen, who was an eye-witness, has left us (Hist. Eccl., IX, 2) an interesting account of the finding of the relics in Constantinople through the instrumentality of the Empress Pulcheria.