Difference between revisions of "Ephraim (Moraitis) of Philotheou" 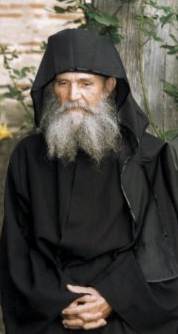 Archimandrite Ephraim of Philotheou (commonly known as Elder Ephraim, sometimes spelled Ephrem) is an archimandrite and former abbot of Philotheou Monastery on Mount Athos, spiritual guide of several monasteries on Mount Athos and Greece, and the founder of several monasteries in the United States. He resides in Arizona at St. Anthony's Greek Orthodox Monastery.

Elder Ephraim has been a priest-monk for the past 50 years and has served as an elder for almost 40 years. He was a disciple of Elder Joseph the Hesychast of Mount Athos and lived in monastic obedience to him for 12 years until his Elder's repose in 1959.

Elder Ephraim was born in 1927 in Volos, Greece, with a baptismal name of John. He grew up in poverty and helped his father at work, but always tried to emulate the pious life of his mother (who became a nun with the name of Theophano). He began to desire the monastic life around 14 years of age, but he did not get a blessing from his spiritual father to leave and become a monk until he was 19.

When he arrived at Mount Athos, he became a disciple of Elder Joseph the Hesychast who tonsured him in 1948 and gave him the name Ephraim. Elder Ephraim was subsequently ordained a deacon, and then a priest. The life in the brotherhood under Elder Joseph was very austere and ascetical, and Elder Ephraim made great spiritual progress under his holy Elder. After Elder Joseph's repose in 1959, Elder Ephraim continued to live in asceticism for many years until he became the abbot of the Holy Monastery of Philotheou in 1973, where he was able to revive the spiritual life there in a short time. Due to the reputation of Elder Ephraim, the monastery's brotherhood grew rapidly. Elder Ephraim was asked by the council of Mount Athos to revive and expand several other monasteries on Mount Athos which had a dwindling number of monks. These monasteries were Xeropotamou, Konstamonitou, and Karakallou. He was also asked to repopulate the Great Lavra but declined. These monasteries are still under his spiritual guidance today. Along with the monasteries on Mount Athos, there are several other monasteries in Greece under Elder Ephraim's spiritual guidance, including the monastery of St. John the Forerunner in Serres, that of Panagia the Directress in Portaria (Volos), and that of the Archangel Michael, a direct dependency of Philotheou on the island of Thasos.