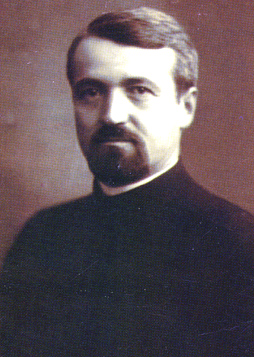 Dumitru Stăniloae was a priest of the Church of Romania who is renowned as an Orthodox theologian, academic, and professor. In addition to commentary on the works of the Church Fathers and a Romanian translation of the Philokalia, his 1978 masterpiece The Dogmatic Orthodox Theology established him as one of the foremost Christian theologians of the later half of the twentieth century.

Dumitru was born on November 16, 1903, in Vladeni, Brasov County, Romania, to Irimie and Rebecca Stăniloae. His mother, Rebecca, was the niece of a priest. He was the youngest of their five children. At the age of thirteen he began studies at the Andrei Şaguna Confessional Humanist Lyceum. The following year he received a fellowship from the Gojdu Foundation. In 1922, he received a fellowship from Cernăuţi University but found the course of study unsatisfactory and withdrew after one year. From 1923-1924 he attended classes at the Faculty of Letters of the University of Bucharest.

Having returned to Cernăuţi University, he graduated in 1927, completing a thesis entitled Baptizing Children under the supervision of Professor Vasile Loichiţă. In the fall of 1928, Dumitru received his doctoral degree after completing his dissertation Life and Work of Dosoftei of Jerusalem and His Connections with Romanian Principalities. Over the next several years he studied Byzantology and Dogmatics under a fellowship from the Metropolitan Center in Sibiu as well as attending courses taught by Professor August Heisenberg in Munich. In 1929 and 1930, he researched documents concerning Gregory Palamas in Berlin, Paris, and Constantinople.

On October 4, 1930, he married Maria Mihu, who presented him the following year with twins, Maria and Dumitru. His son Dumitru died shortly after birth. His daughter Maria survived until April 1946. On October 8, 1931, Dumitru was ordained deacon, followed by his ordination to the priesthood on September 25, 1932. On October 8, 1933, another daughter, Lydia, was born to the couple.

On January 1, 1934, Fr. Dumitru became the director of the newspaper Romanian Telegraph, a position he held until 1945. In June 1936 he was named rector of the Theological Academy in Sibiu.

With the end of World War II, the government of Romania was taken over by communists and began to oppress the Orthodox Church there. Under political pressure, Fr. Dumitru was forced in 1946 to step down from the rectorship of the academy, although he continued teaching as a professor until the next year, 1947. He then transferred to the University of Bucharest, assuming the Ascetics and Mystics Chair as a member of the Faculty of Theology. In 1949, however, this chair was abolished. Still, Fr. Dumitru continued to teach graduate students as a professor of dogmatics.

In 1950 Fr. Dumitru began to attend meetings of the Rugul Aprins (Burning Altar) group. This was a group formed in 1940 by a number of academics, including hieromonks Ivan Kulighin, Benedict Ghuis, and Sofian Boghiu and priests Andrei Scrima and Ion Marin Sadoveanu. The group met at the Cernica and Antim Monasteries and was a center for rejuvenation of Orthodox Christian life in Bucharest. In 1958, coinciding with the withdrawal of the Soviet Army from Romania, a wave of political arrests were made, including members of the Rugul Aprins group. Fr. Dumitru was among those arrested. On September 5, 1958, he was confined to prison to await his trial, which began on November 4, 1958.

Over next several years, Fr. Dumitru was moved among a number of prisons. He was held in isolation for months at a time until he was released in 1963. He then began working for the Holy Synod of the Romanian Orthodox Church. In 1965 he was asked by the Romanian State Department of Cults to write articles and take part in studies as the government attempted to project an image of religious freedom in Romania. Fr. Dumitru was permitted to travel and attend worldwide conferences.

Following are the titles of some of his works: