Difference between revisions of "Divine Liturgy" 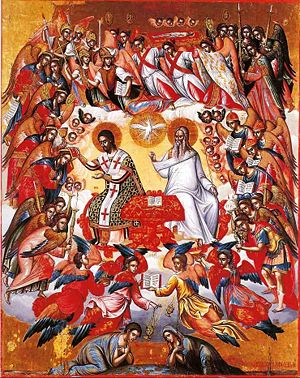 Before the Divine Liturgy begins, the priest and a deacon, if one is serving, begin by preparing the gifts of bread and wine for use in the service. This preparation is itself a considerable service. More than simply setting aside the bread and wine, a robust ritual has developed with elaborate symbolism. Though the main outline is similar for most Orthodox churches, there may be some differences based on which typicon a jurisdiction uses.

Five loaves of bread are used, reminiscent of the five loaves in the wilderness, from which the masses were fed. During the Prothesis, the priest cuts out a square called the Lamb from the main loaf of bread (prosphora). This will be consecrated during the Liturgy of the Faithful to become the holy body of Christ. He also removes small particles and places them on the diskos (or paten) in commemoration of the Theotokos, various saints, and the living and departed faithful. The remainder of the bread is blessed and distributed to parishioners and visitors after the service; this bread is called antidoron.

During the Prothesis, the priest also blesses wine and water, which are poured into the chalice. Warm water will be added to the chalice after the epiclesis.

Naturally, the gifts are censed several times during the Prothesis. The conclusion of the Prothesis leads directly into the beginning of the Divine Liturgy.

After a more or less quiet exchange between the priest and deacon, if one is serving, the Divine Liturgy begins with the memorable exclamation from the priest, "Blessed is the kingdom of the Father and of the Son and of the Holy Spirit, now and ever and unto ages of ages." The assembled faithful respond, "Amen."

The deacon (or priest, if no deacon is serving) continues with the Great Litany, so called because it is longer than most litanies and its petitions touch on the needs of the world: peace and salvation, the Church, her bishops, her faithful, captives and their health and salvation, deliverance from anger and need. It is concluded, as with most litanies, by calling to the remembrance of the faithful the witness of the Theotokos and the saints. In light of that powerful witness, the faithful are charged to commend their lives to Our Lord Jesus Christ. A closing prayer is exclaimed by the priest.

There follow three antiphons which vary by day and jurisdiction. The first two anitphons are followed by a shorter litany and a prayer. The third is followed by the Little Entrance, at which is sung, "O Come, let us worship and fall down before Christ. O Son of God... save us who sing to Thee: Alleluia!" "Son of God" is normally followed by an insertion, such as "risen from the dead," "wondrous in thy saints," or "through the prayers of the Theotokos," depending on the day.

Troparia and kontakia prescribed for the day, season, and temple follow next.

Having fully entered the church liturgically and gathered together around the Word, the gathered body chants the Trisagion.

The proclamation of Scripture is announced with the prokeimenon, a psalm or canticle refrain sung in responsorial fashion. Then, a reader proclaims the apostolic reading from an epistle or from the Acts of the Apostles. This reading is usually chanted, but a spoken reading may be allowed out of economy for local situations. (In some traditions, the reader starts the chant in a very low voice, and steps up to end of the reading with a high voice. This is a reminder of how the Early Church rose up from the catacombs.)

A triple alleluia is sung, also with verses as at the prokeimenon. This alleluia announces the Gospel reading. Following the alleluia, there is a short exchange between the priest and the people, after which he or a deacon chants the Gospel.

Following the Gospel, the priest will often give a homily, a short or medium-length excursus on the Scripture, the season, or the present festival or commemoration, roughly equivalent to the Protestant sermon. The homily may also be given after the communion or even after the dismissal.

The service continues with the Litany of Fervent Supplication, which is marked by an insistent triple repetition of "Lord, have mercy." On certain days this litany is followed by the Litany for the Departed.

The Liturgy of the Catechumens is concluded by a litany praying for the continued growth of the catechumens in faith, leading up to the day of their baptism. Though many churches do not have catechumens in attendance, this litany remains in the liturgy and serves as a constant reminder of the Great Commission, the foundation of the Church as mission to the world.

As the assembly begins chanting the Cherubic Hymn, the celebrants go to the prothesis or table of preparation. The priest presents the diskos to the deacon and takes the chalice himself. The deacon leads the priest through the north door of the icon screen. The clergy bring the gifts in procession to the holy doors, the central doors of the icon screen, while the deacon calls the faithful to attention, asking that the Lord will remember all people in his kingdom. As the holy gifts are carried solemnly through the holy doors, the assembled faithful conclude the Cherubic Hymn. (Note: if a deacon is not present, the priest makes this entrance with the diskos and chalice alone.)

After the priest blesses the faithful, the deacon exclaims, "The doors! The doors!" This famous exclamation once marked the point in the service at which the doors to the temple were locked, with only faithful Christians remaining. Over the centuries, visitors have been allowed to stay, though the solemnity of what follows is still recalled with this phrase.

Then, the Church professes its common faith by reciting the Creed. The liturgical name for this creed is the Symbol of Faith, indicating its importance to early Christians in determining the Orthodoxy of persons claiming to be of the Church.

Following the Creed, the priest begins the anaphora, the great eucharistic prayer over the gifts, so called because of the initial phrase: "Let us lift up our hearts." The two principal anaphoras in use in the Orthodox Church are those of St. John Chrysostom and St. Basil the Great.

After remembering the history of our fall and redemption and the institution of the eucharistic meal, the priest invokes the Holy Spirit, asking that he be sent down on the gifts. It is sometimes noted that this invocation, the epiclesis, is the climax of the change of the gifts of bread and wine into the body and blood of Christ, but there is not total agreement among Orthodox scholars whether the change can actually be pinpointed to a single moment in the service. It is certainly true that the prayers of the service treat the gifts as consecrated and changed after this point.

Having invoked the Holy Spirit and consecrated the gifts, the priest commemorates the saints, beginning with the Theotokos. At this point, the assembled faithful chant the ancient hymn in honour of the Virgin, "It is truly meet to bless you, O Theotokos, ever-blessed and most pure, and the Mother of our God. More honorable than the cherubim, beyond compare more glorious than the seraphim, without corruption you gave birth to God, the Word. True Theotokos, we magnify you."

The priest prays that the bishop, in whose name he is celebrating the Liturgy, will be kept in the Orthodox Faith and preserved in health and years.

The Communion and Dismissal

After consecrating the gifts, commemorating the saints, and praying for the local bishop, the priest lifts up the consecrated gifts, exclaiming, "The holy things are for the holy!" To which the faithful respond, "One is holy, one is Lord, Jesus Christ, to the glory of God the Father, amen." This phrase unfortunately loses something in English, since we have two words for holy and saint. In most other languages, this dialogue has a connotation of, "The holy things are for the saints! / Only one is a saint! Only one is Lord: Jesus Christ...." This is a rather prominent reminder that our holiness finds its source in God alone, and particularly in our participation in this communion.

The faithful communicate in Orthodox tradition by receiving in both kinds (bread intincted in the wine) from a spoon, a tradition which dates to the fourth century. Having received the body and blood of the Savior, they take a piece of antidoron. In Russian tradition, a small cup of wine is also offered.

After a dismissal common to the services of the Church, the faithful come forward to venerate the cross and leave the church. Renewed by the eucharistic meal, they are sent forth as witnesses to Christ in the world.

Essays on eucharistic prayers (anaphoras) from various periods and locales.

Includes the texts of eucharistic prayers no longer extant as well as early redactions of the anaphoras of St. James, St. Basil the Great, and St. John Chrysostom.

A classic reflection on the meaning of the Divine Liturgy from one of the pioneers of liturgical theology.

This is a multi-volume work in progress.