Difference between revisions of "Dionysius of Zakynthos" 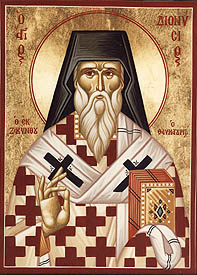 In 1717, the monks, of the monastery of Strofades, moved the Saints relic and placed it inside the metochi [1] of Kalliteros in order to protect him from various destructive invasions by pirates in the area. At a later date, a church was built in his honour in the Ammos area. Later, in 1764, this church was rebuilt and in 1854 a steeple added to the church. In 1893, this church was destroyed by a major earthquake and a temporary church constructed until 1925 where there took place a foundation ceremony to rebuild a earthquake-resistant church; fully completed by 1948.[2]