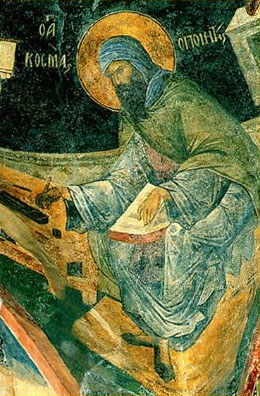 St. Cosmas of Jerusalem
Saint Cosmas the Hymnographer, the Bishop of Maiuma (8th century) was a hymn-writer of the Eastern Orthodox Church and the foster-brother of St. John of Damascus. The teacher of the two boys was an elderly Sicilian, also named Cosmas, who had been freed from slavery by St. John's father. St. John and Cosmas went from Damascus to Jerusalem, where both became monks in the monastery of St. Sabas near that city.