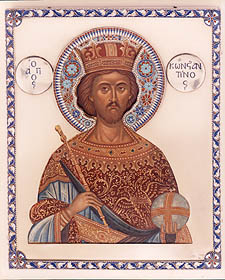 Having seen the figure of the Cross in the heavens,
And like Paul not having received his call from men, O Lord,
Your apostle among rulers, the Emperor Constantine,
Has been set by Your hand as ruler over the Imperial City
That he preserved in peace for many years,
Through the prayers of the Theotokos, O only lover of mankind.

Today Constantine and his mother Helen
Reveal the precious Cross,
The weapon of the faithful against their enemies.
For our sakes, it has been shown to be a great sign, and fearsome in battle.