Constantine of Cornwall and Govan 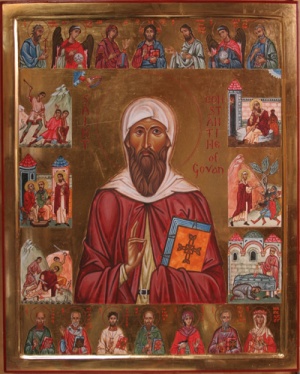 Saint Constantine of Cornwall, also Constantine of Dumnonia, Constantine III of Britain, Saint Custennin, Custennin ap Cado, Custennin ap Cadwr,[1] Costentyn or Constantine of Govan (ca. 520-576 AD)[2][3] is a 6th century Cornish saint that is identified with a minor British king Constantine, who came to repentance at St Davids monastery in Wales, after a life of vice. It is maintained that he went from Wales to Ireland, and from there went as a missionary to the Picts in Scotland, where he was martyred by pirates at Cantyre (Kintyre); however there are difficulties with this latter part of his hagiography involving a conflation of events with one (or two) other 'Constantines'.

His feast day is observed on March 9,[2][3][4] in the tradition of Cornwall and Wales, and on March 11[5][6][7] in the Scottish and Irish traditions. Two places in Cornwall are still named after him today.[4]

It is possible that the British king (†576)[2] is not the same person as the Scottish martyr (†576,[8] or †590[6]).[note 1] To add to the ambiguity there is another saint from a slightly later period, King Constantine of Strathclyde (†640), whose feast day is on March 11 as well, but who is said to have reposed in peace (i.e. not martyred),[9] and whose life has been inextricably conflated with the Scottish king-martyr. Therefore the traditions of St. Constantine of Cornwall (identified with the Scottish martyr of the same date), and St. Constantine of Strathclyde are very much confused. Canon G.H. Doble in his Cornish Saints says that “the name has given rise altogether to one of the most fearful series of muddles in the whole history of hagiography.”[10][note 2]

Constantine of Cornwall probably succeeded his father, Cador, as King of Dumnonia in the early 6th century. Literary tradition indicates AD 537, after the Battle of Camlann from which, some sources say, "Sir Constantine" was the only survivor.[3] He is reputed to have been married to the daughter of the King of Brittany and to have led a life full of vice and greed until he was led to conversion by Saint Petroc:

One day, while out hunting a deer, his prey took shelter in St. Petroc's cell. So impressed was the King by the saint's power that he and his body guard immediately converted to Christianity. Constantine gave Petroc an ivory hunting horn in commemoration of the event and this was long revered along with the Saint's other relics at Bodmin. The King became co-founder of this famous Cornish monastery.[3]

After the death of his queen he resigned the crown to his son, in order to take up the religious life himself.

He moved amongst his people, founding churches at the two Constantines, near Padstow and Falmouth, and at Illogan; also at Milton Abbot and Dunsford in Devon. Later, he travelled across the Bristol Channel to join St. Dewi (David) at Mynyw (St. Davids), where he resided as a monk for many years. He founded the church at Cosheston, near Pembroke, but eventually settled as a hermit in Costyneston (Cosmeston) near Cardiff. He may have died there, though there are persistent stories that he travelled still further north and preached to the people of Galloway before being martyred in Kintyre on 9th March AD 576.[3]

However according to Bishop Richard Challoner's hagiography of "Saint Constantine, Prince and Priest", in Britannia Sancta (1745), as listed in William Canon Fleming's A Complete History of the British Martyrs (1902):

Martyred at Cantyre, in Scotland, on March 11th, 590.
"The Scottish Breviaries commemorate on March 11th the Feast of Saint Constantine, Martyr. He is said to have been a prince who, after the death of his princess, retired from the world, and, having resigned his kingdom to his son, became a monk in the Monastery of Saint David's. Going afterwards to Ireland, he entered a religious house at St. Carthag at Rathene, where, unknown to any, he served for four years at a mill, until his name was discovered. He was then fully instructed, ordained priest, and sent as a missionary to the Picts in Scotland. Having for many years laboured with Saint Columba for their conversion, he established a religious community of men at Govan, and converted the inhabitants of Cantyre to Christianity. At length the happiness he so long desired came to him in his advanced age; he was slain by infidels actuated by hatred of the Christian religion."[6]

Gildas
The only contemporary information about him comes from Gildas, writing in 547 AD, who mentions Constantine in chapters 28 and 29 of his work De Excidio et Conquestu Britanniae.[11][12] He is one of five Brythonic kings whom the author rebukes and compares to Biblical beasts. Constantine is called the "tyrannical whelp of the unclean lioness of Damnonia". This Damnonia is generally associated with the kingdom of Dumnonia, a Brythonic kingdom in Southwestern Britain.[13] However, it is possible that Gildas was instead referring to the territory of the Damnonii in what was later known as the Hen Ogledd or "Old North". Gildas says that despite swearing an oath against deceit and tyranny, Constantine disguised himself in an abbot's robes and attacked two "royal youths" praying before a church altar, killing them and their companions.[note 3] Gildas is clear that Constantine's sins were manifold even before this, as he had committed "many adulteries" after casting off his lawfully wedded wife. Gildas encourages Constantine, whom he knows to still be alive at the time, to repent his sins lest he be damned.[11][12]

Geoffrey of Monmouth
Much later, Geoffrey of Monmouth included the figure in his pseudohistorical chronicle Historia Regum Britanniae, adding fictional details to Gildas' account and making Constantine the successor to King Arthur as King of Britain. Under the influence of Geoffrey, derivative figures appeared in a number of later works. 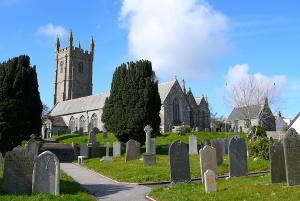 The saint at Constantine Bay was almost certainly the 'wealthy man' of this name mentioned in the Life of Saint Petroc. The ruined chapel at Constantine Bay also has a nearby holy well, uncovered in 1911. Taking the waters there was said to bring rain during dry weather. The chapel's splendid font is now in the parish church at St Merryn.

In addition, Constantine's name is given to the parish church of Milton Abbot in Devon, as well as to extinct chapels in Illogan and Dunterton.

The saint's day is generally celebrated on March 9, and an annual "Feast" is held in the village of Constantine, on the Sunday nearest to March 9.

English archaeologist and historian C. A. R. Radford has said that the Constantine whose shrine is at Govan, and the Constantine connected to an important church in the Deanery of Desnes (Diocese of Galloway) are possibly different men, although the two are inextricably conflated in the hagiographical literature.[15]

Grieving at the loss of thy young spouse,
thou didst renounce the world, O Martyr Constantine,
but seeing thy humility God called thee to leave thy solitude and serve Him as a priest.
Following thy example,
we pray for grace to see that we must serve God as He wills
and not as we desire,
that we may be found worthy of His great mercy.

Thou wast born to be King of Cornwall,
O Martyr Constantine,
and who could have foreseen that thou wouldst become the first hieromartyr of Scotland.
As we sing thy praises, O Saint,
we acknowledge the folly of preferring human plans to the will of our God.

(Celebrated March 9 in Wales and Cornwall; March 11 in Scotland; and March 18 in Ireland)

(Saint Constantine the Martyr, King of the Scots, May 9).