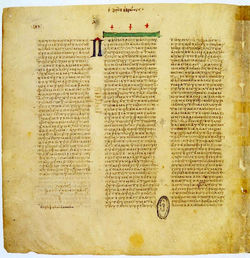 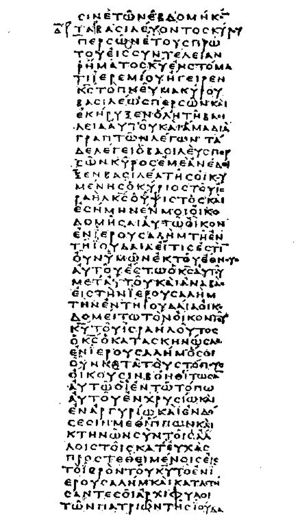 A section of the Codex Vaticanus, containing 1 Esdras 2:1-8

The Codex Vaticanus (The Vatican, Bibl. Vat., Vat. gr. 1209; Gregory-Aland no. B or 03) is one of the oldest extant manuscripts of the Bible. It is slightly older than Codex Sinaiticus, both of which were probably transcribed in the 4th century. It is written in Greek, on vellum, with uncial letters.

Vaticanus originally contained a complete copy of the Septuagint ("LXX") except for 1-4 Maccabees and the Prayer of Manasseh. Genesis 1:1-46:28a (31 leaves) and Psalm 105:27-137:6b (10 leaves) are lost and have been filled by a recent hand. 2 Kings 2:5-7, 10-13 are also lost due to a tear in one of the pages. The order of the Old Testament books is as follows: Genesis to 2 Chronicles as normal, 1 and 2 Esdras, the Psalms, Proverbs, Ecclesiastes, Song of Songs, Job, Wisdom, Ecclesiasticus, Esther, Judith, Tobit, the minor prophets from Hosea to Malachi, Isaiah, Jeremiah, Baruch, Lamentations and the Epistle of Jeremiah, Ezekiel and Daniel.

The extant New Testament of Vaticanus contains the Gospels, Acts, the General Epistles, the Pauline Epistles and Hebrews (up to Heb. 9:14, καθαριει); thus it lacks 1 and 2 Timothy, Titus, Philemon and Revelation. These missing pages were replaced by a 15th century minuscule supplement (no. 1957).

The Greek is written continuously with small neat writing, later retraced by an 11th century scribe. Punctuation is rare (accents and breathings have been added by a later hand) except for some blank spaces, diaeresis on initial iotas and upsilons, abbreviations of the nomina sacra and markings of Old Testament citations.

The manuscript contains mysterious double dots (so called "umlauts") in the margin of the New Testament, which seem to mark places of textual uncertainty. There are 795 of these in the text and around another 40 that are uncertain. The date of these markings are disputed among scholars and are discussed in a link below.

On page 1512, next to Hebrews 1:3, the text contains an interesting marginal note, "Fool and knave, can't you leave the old reading alone and not alter it!" which suggests that inaccurate copying, either intentional or unintentional, was a known problem in scriptoria.[1]

The manuscript has been housed in the Vatican Library (founded by Pope Nicholas V in 1448) for as long as it has been known, appearing in its earliest catalog of 1475 and in the 1481 catalogue. Its place of origin and the history of the manuscript is uncertain, with Rome, southern Italy, and Caesarea all having been suggested. There has been speculation that it had previously been in the possession of Cardinal Bessarion because the minuscule supplement has a text similar to one of Bessarion's manuscripts. According to Paul Canart's introduction to the recent facsimile edition, p.5, the decorative initials added to the manuscript in the middle ages are reminiscent of Constantinopolitan decoration of the 10th century, but poorly executed, giving the impression that they were added in the 11th or 12th century. T C Skeat, a paleographer at the British Museum, first argued that Codex Vaticanus was among the 50 Bibles that the Emperor Constantine I ordered Eusebius of Caesarea to produce. The similarity of the text with the papyri and Coptic version (including some letter formation), parallels with Athanasius' canon of 367 suggest an Egyptian or Alexandrian origin.

Codex Vaticanus is one of the most important manuscripts for textual criticism and is a leading member of the Alexandrian text-type. It was heavily used by Westcott and Hort in their edition, The New Testament in the Original Greek (1881).