The Church of Saint Demetrios in Thessalonica, Greece is situated on the site of previous churches built over the ruins of the Roman bath where St. Demetrios the Myrrhgusher was imprisoned and martyred. The present structure is a reconstruction of the seventh century church that was destroyed by fire in 1917. The church is a basilica with five apses, a narthex, and transept.

The first structure, a small chapel, was built over the ruins of a Roman bath, shortly after 313, This chapel and an earthen urn were discovered during excavations made when the present church was being rebuilt. The earthen urn contained earth with human blood, perhaps that of St Demetrios.

During the fifth century, Eparch Leontios had a large basilica with three apses constructed on the site of the chapel. Between 626 and 634, the basilica burned down. Soon after a new basilica was built that had five apses. The church remained in use until Thessalonica was captured by the Ottoman Turks in 1493, who converted the church into a mosque. When Greece gained independence from the Turks in 1912, the Church of St. Demetrios was restored for Orthodox Christian services. In 1917, however, the church burned down. 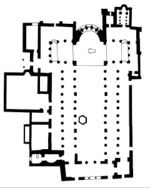 Plan of the Church of St. Demetrius in Thessalonica

Immediately, efforts to restore the church began. During these efforts the naos and crypt were opened. The restoration, however, was stopped in 1938 and not resumed again until 1946. At this time systematics excavations were made and the new church with five apses was built. By 1949, construction had progressed so that services were able to be conducted.

Preserved in the crypt of the new church is the bath in which St. Demetrios was martyred and the remains of the first chapel built on the bath. Also, recovered was a large marble basin that was used to collect the holy myrrh that emanated from the grave of the martyred saint, which gave rise to the appellation Myrrhgusher for St. Demetrios.