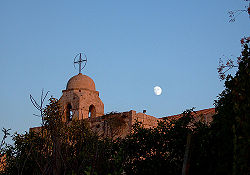 The seat of the patriarchate was formerly Antioch (Antakya), in what is now Turkey. Now it is in Damascus, Syria, located on the "street called Straight." The current Patriarch of Antioch is His Beatitude, [John X (Yazigi), who was elected on December 17, 2012.

The most recent patriarch was His Beatitude Patriarch Ignatius IV (Hazim) of Antioch and all the East, elected in 1979. Patriarch Ignatius was particularly active in strengthening ties with other Christian communions, but particularly with those whose roots are in Antioch. His Beatitude and the holy synod of Antioch were enthusiastic for the Church of Antioch to participate in general talks between representatives of all the Eastern Orthodox and Oriental Orthodox Churches.

Patriarch Ignatius also oversaw participation in a bilateral commission with the Melkite Greek Catholic Church, which is exploring ways of healing the 18th century schism between the Melkite Catholics and the Antiochian Orthodox. In an unprecedented event, Melkite Patriarch Maximos V addressed a meeting of the Orthodox holy synod in October 1996.

With the onset of the civil war in Syria in 2010, the situation of Christians in Syria has worsened. Several churches have attacked and destroyed, and many Christians have been expelled by rebels and become refugees.

Patriarch Ignatius remained on the Patriarchal throne until his death in 2012. The Holy Synod of the Church of Antioch then elected the former Antiochian Metropolitan for Europe, John Yazigi to the patriarchal throne of Antioch on December 17, 2012, with the title of His Beatitude John X of Antioch and all the East.

Synaxis of the Great Saints of the Holy Church of Antioch
Column of St. Symeon the Stylite, Syria

The Antiochian Patriarchate consists of nineteen archdioceses, each ruled by a Metropolitan Archbishop. Of these, only the Archdiocese of North America has constituent dioceses.

The Syriac Hymnal, Syriac Music Institute, 2019. The “first official and complete hymnal” according to the rite of the Syriac Orthodox Church of Antioch. An Audio CD of 384 hymns from the book is also available.