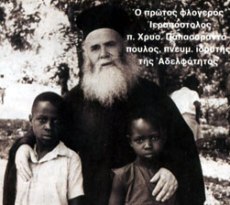 In 1963 Father Chrysostomos became the spiritual founder of the missionary society "The Friends of Uganda," (known today as the Orthodox Missionary Fraternity) which continues its mission today from the city of Thessaloniki.[note 8]