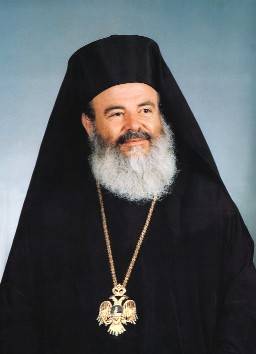 Christodoulos was born at Xanthi in 1939. In 1962 he graduated from the School of Law and in 1967 from the School of Theology. In 1961 he was ordained deacon, and priest in 1965. He served as a preacher and senior spiritual father at the Church of Assumption of the Virgin Mary at Palaio Phalero for nine years, and, for seven years he served as a Secretary of the Holy Synod. He took part in many religious missions abroad. He earned a Doctorate of Theology, as well as degrees in French and English, and he also spoke Italian and German. He was the author of many scientific and constructive books. He had written articles in religious press and in dailies.

He was elected Metropolitan of Demetrias in 1974 and Archbishop of Athens and all Greece in 1998.

"Christodoulos has often stirred controversy with politically tinged statements. He was instrumental in attempts to improve ties with the Catholic Church; in 2001, Christodoulos received in Athens Pope John Paul II—the first pope to visit Greece in nearly 1,300 years—ignoring loud protests from Orthodox believers. In 2006, he made a historic visit to the Vatican, where he and Pope Benedict XVI signed a joint declaration calling for inter-religious dialogue and restating opposition to abortion and euthanasia. In Greece, politicians accused the archbishop of meddling in their affairs, and were angered by his vocal criticism of everything from homosexuality and globalization to Turkey's efforts to join the European Union and government efforts to tone down nationalism in school history books." 1

He was a charismatic leader who engaged the youth of the country and who was also credited with reinvigorating the vast institution of the church in Greece during his tenure.

In June 2007, after undergoing intestinal surgery in Athens the Archbishop was diagnosed with liver and colon cancer. He then waited fifty days in Miami, Florida for a compatible liver to become available. However, the transplant was halted in October 2007 after tumors were found in the archbishop's abdominal cavity. He died from the spread of cancer on January 28, 2008.

A four-day period of mourning was announced by the government of Greece following his death which included funeral plans befitting a head of state. His funeral was held on January 31, 2008. It was presided over by the Ecumenical Patriarch Bartholomew I, Patriarch Theophilos III of Jerusalem, Patriarch Theodore II of Alexandria, Patriarch Daniel of Romania, and was also attended by the Archbishop of Cyprus Chrysostomos II and the Archbishop of America Demetrios. The election of his successor was carried out by the Synod of the Metropolitans of the Church of Greece on February 7, 2008.

Despite the criticism, Archbishop Christodoulos proved to be one of the most popular archbishops in Greek history, having a particular rapport with young people.