Difference between revisions of "Cherubim" 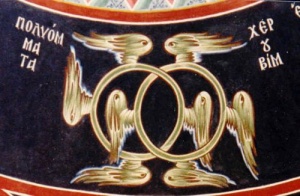 An icon of the many-eyed Cherubim angels.

In the Divine Liturgy the song of cherubim is sung in the ligurgy of faithful, representing cherubim between whom the Lord dwells.