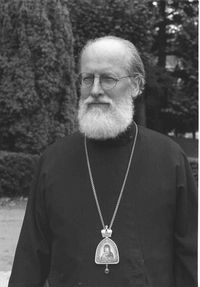 Dr. Alfred Herbert Ernest Osborne, formerly Bishop Basil of Amphipolis, was a titular bishop under the Ecumenical Patriarchate from 2006 until February of 2010, and was formally known as one of "the bishops of the Throne." He served as an assistant bishop in its Patriarchal Exarchate for Orthodox Parishes of Russian Tradition in Western Europe, charged with the care of its flock in Great Britain and Ireland, until his retirement in late 2009 and his subsequent request for laicisation in February of 2010. He previously served as the temporary administrator of the Moscow Patriarchate's Diocese of Sourozh (August 2003 - May 2006) with the title Bishop of Sergievo.

Departure from the Diocese of Sourozh

He was retired from his position as administrator of the Sourozh diocese after seeking incardination into the Ecumenical Patriarchate without receiving release from Moscow.[1] In a letter sent to the Patriarch of Moscow without notice to his clergy, Bishop Basil requested that he and the whole of the Diocese of Sourozh (and not simply those members who wished to follow him) be released from the jurisdiction of the Moscow Patriarchate, to be received into the jurisdiction of the Ecumenical Patriarch as a new diocese existing alongside Constantinople's Patriarchal Exarchate for Orthodox Parishes of Russian Tradition in Western Europe.[2] Without awaiting a full response from the Patriarchate of Moscow, he wrote to the Ecumenical Patriarch on May 2, 2006, again repeating his desire to establish a new diocese under Constantinople.[3] Announcement of Bishop Basil's retirement by the Synod of Moscow followed upon his refusal to withdraw this letter to Constantinople. Following announcement of his retirement in the Sourozh cathedral in London, Basil immediately appealed the decision to the Ecumenical Patriarchate on the basis of Canons 9 and 17 of the Fourth Ecumenical Council and also Canon 28 of the same Council. Such canons, some argue, endow the Constantinopolitan Patriarch with the privilege of the "ekkliton" (read, hearing appeal) and granting it jurisdiction over regions not already subject to the other four senior Patriarchates, Rome, Alexandria, Antioch and Jerusalem. It should be noted, however, that this interpretation of these canons is not undisputed, and runs contrary to the classical interpretations of the canons found in the canonical commentaries of the Church.[4]

The Ecumenical Patriarchate subsequently accepted Bishop Basil into its jurisdiction on the basis of his appeal which followed, although Moscow had not issued a canonical release and had instructed him not to be received into another patriarchate until matters could be looked into by an appropriate commission. Additionally, it requested his presence in person numerous times, which Bishop Basil refused to heed on all occasions, instructing others to do likewise.[5] Given these circumstances, the Moscow Patriarchate did not regard his incardination into the Ecumenical Patriarchate as valid, nor did it recognize the title Bishop of Amphipolis given to him by the Holy Synod of the Patriarchate of Constantinople on June 8, 2006.[6] Considering him still a bishop of the Russian Orthodox Church, but in retirement, it referred to him in official correspondence without titular connection, as 'The Right Reverend Bishop Basil (Osborne)'.[7] Similarly, it did not regard as valid the 'letters of release' issued by Bishop Basil to all his former clergy in the Diocese of Sourozh- letters either backdated or prepared earlier, in early February.[8] Bishop Basil was summoned to appear before the MP synod onJuly 17,[9] Bishop Basil declined to appear. From July 19, 2006 the Synod of the Moscow Patriarchate placed him under temporary suspension, forbidding him 'from celebrating divine services until his repentance or until the decision of the matter by a court of bishops'.[7]

The resolutions of the Moscow Patriarchate of July 19, 2006, therefore made Bishop Basil's canonical stature a matter of intense dispute between Moscow and Constantinople. According to the Ecumenical Patriarchate, Basil could legitimately celebrate as a bishop; according to Moscow, he was forbidden to do so. Accordingly, no communicant of the Moscow Patriarchate who wished to remain faithful to the decisions of his hierarchy could knowingly participate in a Liturgy at which Basil celebrated as a bishop, nor could they receive Holy Communion from him. Similarly, after these resolutions, no Moscow Patriarchate priest could concelebrate with Basil.[1]

In his position in the Ecumenical Patriarchate's Exarchate in Western Europe, Bishop Basil had authority over a newly-formed vicariate of parishes in the British Isles entitled the Episcopal Vicariate in Great Britain and Ireland, which consisted of a small number of parishes and some smaller Eucharistic Communities that elected to follow him in his departure from the Diocese of Sourozh (these are enumerated and discussed here).[16] As part of this role, he sits on the council of the Exarchate.[17]

In late 2009, Bishop Basil requested retirement, which was granted him, and the parishes which he formerly led as a Vicariate were then given the status of a deanery.

Subsequently, in February 2010 he requested to be defrocked and laicised in order to have the option of marrying and having a normal family life, a request which was then granted, and Dr Osborne was returned to the laity.