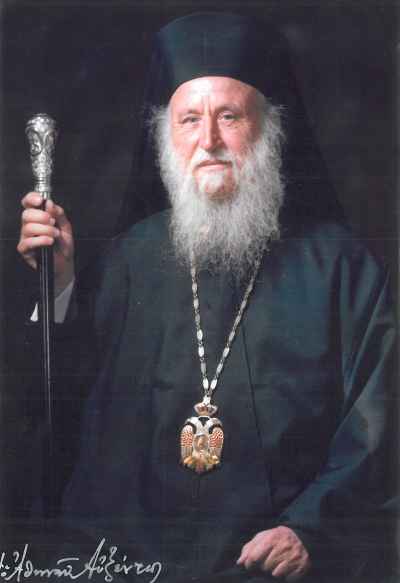 Archbishop Auxentios (Pastras) Archbishop of Athens and All Greece (T.O.C.) The blessed Archbishop and primate of the T.O.C., Auxentios —in the world Konstantinos— Pastras, was the most suffering of the clerics of the T.O.C. during modern history: attacked from outside and inside by enemies of the Traditional Orthodox Church. He was born in 1912 in Agios Theodoros, Magnisia, and at a young age became a monk at the Holy Monastery of the Transfiguration, Kouvara, Attica. In 1938 he was ordained to the diaconate and to the priesthood by Bishop Matthaios of Vresthena. Because of the uncanonical consecrations of bishops in 1949, he left the party of Bishop Matthaios and joined Metropolitan Chrysostomos of Florina. He served as an ecclesiastical agent in many sub-departments of Greece and abroad. In 1962, he was consecrated Bishop of Gardikion by Archbishop Leonty Filippovich of the Russian Orthodox Church of Abroad and Bishop Akakios of Talantion. In 1962, he succeeded the deceased Archbishop Akakios (Papas). He founded the Holy Monasteries of Saint John the Theologian in Petroupoli, Attica, and the Ascension of Christ in Kapandriti, Attica. During his Primacy, the Church of the T.O.C. received many benevolent decisions from the state. In 1985, members of the Synod deposed him, seduced by his malevolent enemies. He died in the Lord on November 4 (O.S.), 1994.