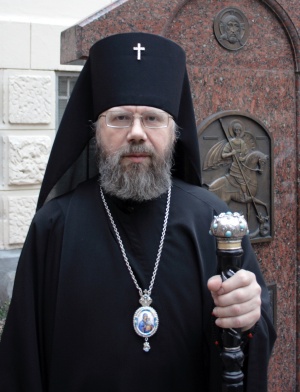 Abp. Augustine of Lvov and Galicia.

Archbishop Augustine (Markevitch) of Lviv and Galicia ((Ukrainian) Августин (Маркевич)), was born April 7, 1952 as Adam Ivanovitch Markevitch in the village of Glushkovichi, Gomel Region, in the Lyelchytsy district of Belarus. On September 20, 1992 he became the Bishop of Lviv, and from 1998 he has served as the Archbishop of Lviv and Galicia (Church of Ukraine (Moscow Patriarchate)).

Archbishop Augustine is ethnically Belarusian, and was the son of an Orthodox priest, who came from a long line of priests. According to Archbishop Augustine, his paternal grandfather died on the front lines during WWII, and his uncle who was a border guard was also killed during the defense of Grodno. The village of Glushkovichi where he was born was completely destroyed by the invading German troops, however Vladyka's mother and aunt managed to save themselves.

He graduated from medical school in 1971 and worked briefly at the ambulance station in Rivne, after which he completed his military service from 1971-73.

Later in the years 1977-78 he served as the the rector of St. George's Orthodox Church in the village of Belilovka, Ruzhyn Raion, in the Zhytomyr Region of Ukraine.

Between 1978-92 he first served as the assistant priest of the Church of the Intercession in the city of Korosten (Zhytomyr Oblast), and afterwards as its main priest. In 1989 he became the Provost[note 1] of the Korosten Raion.

On September 16, 1992, the Holy Synod of the Ukrainian Orthodox Church elevated him to the rank of Archimandrite, after he had been tonsured as a monk with the name of Augustine, and was made the Bishop of Lviv and Drogobych. A few days later on September 20, 1992, Metropolitan Vladimir (Sabodanom) and other Bishops consecrated Augustine in the Kiev-Pechersk Lavra as head of the Diocese of Lviv.

In 2001 he became the Chairman of the All-Ukrainian NGO named the "Orthodox Way".

On July 28, 1998 he was elevated to the rank of Archbishop of Lviv and Drogobych. However soon thereafter on November 5, 1998 by the Decision of the Holy Synod of the UOC, the title was changed to "Lviv and Galicia".

In 2007 under the supervision of Archpriest Maxym Kozlov, he defended his thesis "Uniatism: Theological Aspects."

On February 10, 2011 the Synod of the UOC relieved Archbishop Augustine from his duties as a member of the Supreme Council of Ukraine (Verkhovna Rada), and appointed him Chairman of the Theological Commission of the UOC.

Thanks to the efforts of Archbishop Augustine, the Diocese of Lviv was saved from being eliminated by the local authorities. After the previous Bishop of Lviv, Andrey (Goraka) retired, along with many of the clergy, the authorities of the Lviv region removed the official registration of the Diocese of Lviv (UOC-MP). They also threatened to remove the Pokrovsky Cathedral, the Diocesan Administration building, the residence of the Bishop, the Archive, and the Sacristy from the Diocese's control.

Archbishop Augustine was able to obtain the official registration of the Diocese again, and thanks to him many of the non-canonical clergy returned to the bosom of the canonical Church. During his episcopate, Archbishop Augustine has been subjected to many threats and direct attacks from the opponents of the UOC-MP.

In 1994 he concelebrated the Paschal Liturgy with Patriarch Diodoros I (Karivalis) of Jerusalem, who later addressed a special message to the clergy and faithful of the Diocese of Lviv.

In January 1997 as a member of the Synodal Theological Commission, together with Bishop Eugene (Reshetnikov) of Vereya, he spoke in favour of limiting the participation of the Russian Orthodox Church in the World Council of Churches and in other ecumenical organizations, and proposed to move from the status of a member of these organizations to the status of an observer.

On February 17, 1997, he addressed the Bishops Council of the Russian Orthodox Church with a call to anathematize the former Metropolitan Filaret (Denisenko) and former priest Gleb Yakunin.

He was a member of the Commission for Dialogue between the Russian Orthodox Church and the Roman Catholic Church in Geneva in 1994, and in Moscow a year later in 1995. In 1998 he headed a delegation to the negotiations between the UOC-MP and the UGCC in Vienna. And in 2007 he headed the ROC delegation at the talks with the Ethiopian Orthodox Tewahedo Church in Addis Ababa.

Archbishop Augustine supports the co-operation of the Orthodox Church with other faiths only in the humanitarian field, while opposing ecumenism.

In 2000 he served a memorial service for the dead sailors of the submarine "Kursk". In addition, he has provided pastoral care for servicemen on the Ukrainian submarine "Zaporizhia", and the Russian submarines "Daniel of Moscow" and "Voronezh".

Archbishop Augustine visited the Ukrainian contingents in Iraq two times during the conflict there, and seven times in the Kosovo area. He also went to the tense Transdniestria region between Moldova and Ukraine.

He once served the Divine Liturgy in the air on a military transport plane (An-26), and has continued to skydive after becoming a Bishop. He knows how to operate many types of military vehicles and planes as well.