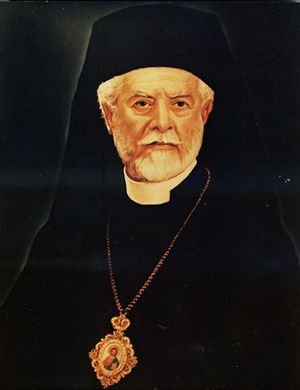 In 1921, he was called by Metropolitan Meletios (Metaxakis), who later became Ecumenical Patriarch, to America, where served several Greek parishes (Greek Orthodox Archdiocese of North and South America). He served at Holy Trinity Church in San Francisco, California for 1921 to 1927. After he was named vicar general of the Archdiocese of America.

In 1937, he was appointed rector of "Holy Cross" Institute of Theology in Brookline (Boston) . In 1938, Fr. Athenagoras was consecrated Bishop of Boston, auxiliary bishop of the Archdiocese of America. That position he held until 1949.

In 1949, he became Metropolitan of Philadelphia (residing in Athens)

In 1951, he was appointed Archbishop of Thyateira and Great Britain, and Exarch of Western Europe, Ireland, and Malta (with his See in London).

This article or section is a stub (i.e., in need of additional material). You can help OrthodoxWiki by expanding it.
Retrieved from "https://orthodoxwiki.org/index.php?title=Athenagoras_(Kavadas)_of_Thyateira_and_Great_Britain&oldid=128630"